Last night we never wandered far from our albergue.  We went from the albergue to the hotel and back again but that was only 100m so I guess it doesn’t count.

I slept well but Gerry says it was just OK?  But hey… I’m feeling good.  We had breakfast with our fellow pilgrims… As with last night’s dinner we are Swedish, Brazilian, Italian, Spanish and us.  We ate and sorted our bags and hit the road.  It had rained overnight but had stopped by the time we left.

Today was not too far but gosh it was going to be a lot of up.  Lots and lots of that.  The first 7km was actually going to be all up and although it was day light we walked the first hour under the canopy of the forest so it was pretty dark.  Up and up we went watching every step; rocks and tree roots and half light aren’t great bedfellows.  After one particularly steep section we turned a corner to yet another equally steep bit.  Gerry called back the he felt he’d been climbing up stairs for 2 km… He also swore a lot but it’s best I skip that section. 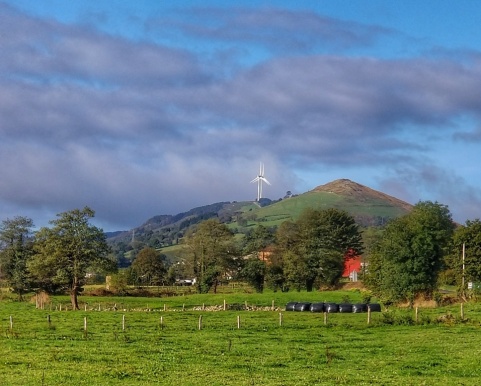 Up and up we went until we popped out from under the canopy and onto a road.  Whilst that was nice and flat there was no shoulder and the cars were whizzing around the bends so we quickened our pace until we turned off again back on the trail.

All was well in my world until we encountered some more cows leaving their milking shed. “Ah look at the cows” I exclaimed, whilst grabbing my camera… I do like them from a distance.  However as we walked closer one cow went rogue.  She turned and looked right at us and then picked up her pace and came towards us.  That was enough for me and I turned tail and ran back up the hill but Gerry stood his ground.  As it happened the cow was heading for a patch of grass across from us.  OK, but she was still away from the herd?  And where was the farmer?  I moved a little closer but then a few more rogue cows filed out of the barn to join the first.  I was nervous.  And where was this farmer?  I could tell that Gerry was losing patience with me.  His words were kind but his tone was becoming more exasperated.  There was nothing for it, I had to negotiate my way around and join Gerry.  I skirted as far as I could around the grassy verge to get around the rogue cows but just as I was right on them the flippin farmer finally appears.  Great!  He shood them on so they all turn and head right in my direction.  I ran towards Gerry but further up a lane in the wrong  direction.  More coaching from Gerry to get me to leave as the cows are herded off by the farmer.  We decided to follow but from a distance.  Typically they were all walking along the camino.  But just as it seemed all would be well the farmer stopped herding and goes back to his farm leaving the rogue cows to do their thing.  But their thing was then interrupted by a huge lorry coming the other way down the lane.  Most of the cows move out they but one just stands his ground in the road.  (Honestly you couldn’t make this up) The lorry driver has no patience so he beeps the cow and of course the remaining rogue beasts panic and turn tail back in our direction.  As they moved so does the lorry.  All now heading down the lane and towards us.  There was no where to go.  The three remaining rogue cows were panicking, they had that wide eyed looked of terror as they ran from one side of the tiny lane to the other trying to escape.  Oh god.  They were coming right to us. A lorry chasing rogue cows up a tiny lane with us in the way and the flippin farmer now coming up behind us in his tractor and his flippin dog blocking our escape.  We ran and the cows ran.  We jumped into the hedge and the flippin cows followed.  “Ffs stupid cows go find your own bank!”  The farmer finally sensed my mounting panic and the crazy situation and started shouting.  Finally the cows headed in his direction and away from us.  We stayed in the hedge, ankle deep in stinging nettles and the lorry went on his way.  We stayed in the nettles until the cows were gone.  Ouch! 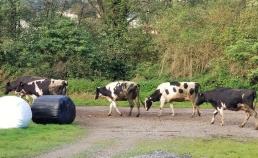 When the coast was clear we slowly walked on.  “Did you get stung? ”  I asked “Yep” he replied.

The trail continued until we reached a coffee stop.  We’d walked up the worst  7km and dealt with cows… Life was great.  We deserved a coffee.  We found hot coffee and maybe the nicest tortilla patata ever and the waitress even gave Gerry four free little cakes.  Result! 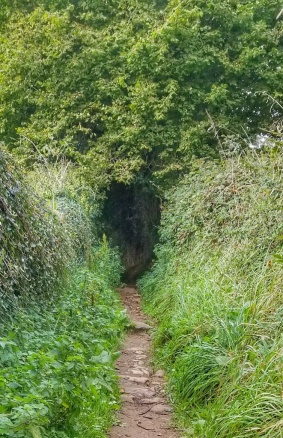 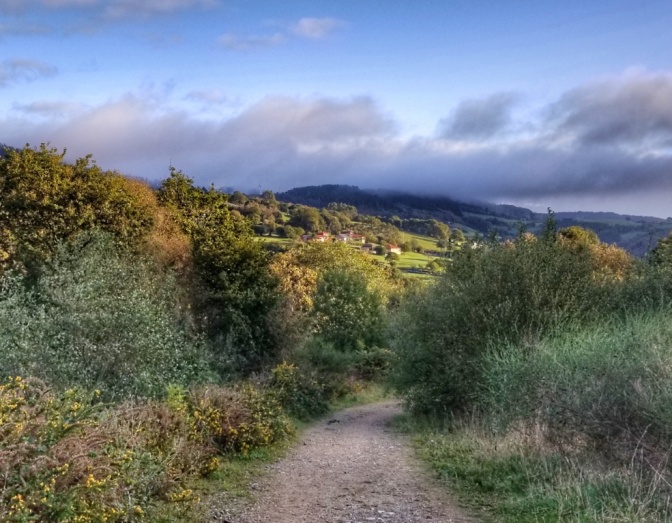 A little while later we walked through a farm and the farmer was sorting his tractor.  It was a dairy farm and smelt of cow poo and the tractor was really noisy so I moved on quickly.  Gerry was slower and greeted the farmer with a little buenas and a wave.  Once through the farm Gerry stopped and laughed.  “What?  Why are you laughing?” I asked “I just realised that if the tractor noise was louder than my voice then it looked like I blew the farmer a kiss as I waved”  I got Gerry to say buenas a few times and yep… It totally did.  I laughed a lot for a long time.  Take a look at decide for yourself! 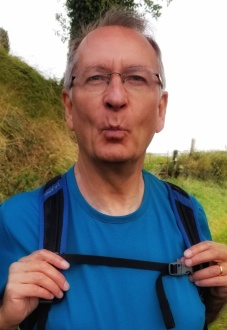 So on we walked.  It threatened rain but it never really happened.  It was cool today so great walking weather.  We criss-crossed our pilgrim friends all day and ended up sharing a bench with the Swedes.  We hadn’t passed any shops to stock up so our supplies were low but no worries Gerry had his emergency apple to keep us going until we arrived.

Tonight we’re in a Pension.  It’s lovely.  We tried our luck chatting  with the four Spanish guys… They’re from Cadiz and they seemed impressed that we knew it.

The great news was that my new Tevas were here waiting for me. The bad news is that they are so different and hugely less wide.  However we managed to rebox them, ask senora to print a return label, buy some parcel tape and drop them off at the returns depot without too much pain.  Oh well… No new Tevas but we still had the emergency apple so all was well.

We found a supermarket and decided to have a room picnic… Humous, tuna and a fabulous avacado… And Gerry still has half a bottle of cider. (and his precious apple)

We walked just shy of 22km but my word we walked an accumulative up of over 1200 metres! 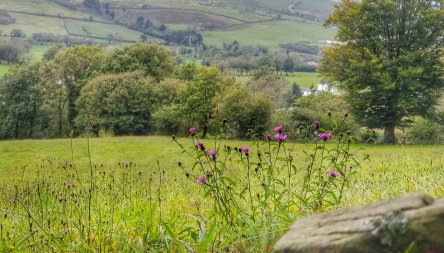 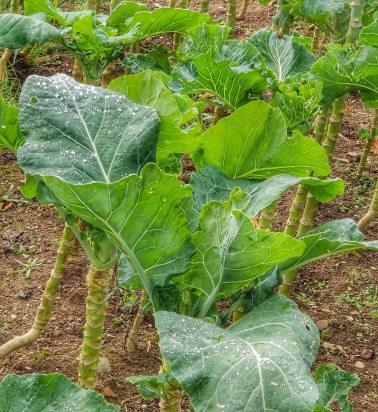