Yesterday a Pilgrim friend mentioned my blog contained rather more flippins than usual.  So I’ll just state from the outset that today was very different.

We had our own little room last night but shared breakfast with the four Spanish guys and the young German couple.  We forgot to get cash as we walked out of town, which was rather stupid of us but at this point in the morning we were oblivious.

Our hotel was almost on the camino, we just had to cross the road and walk up.  Today there was less elevation and a shorter distance but its all relative and that first climb in the morning still felt tough.  But oh wow we soon forgot about stiff joints and tired muscles because the views were just so beautiful.  Every turn brought us a different viewpoint and the higher we climbed the more you could see.  We walked above the clouds and looked down on Tineo as the sun rose.  Yet more wows. Yet more pauses to just stand and stare at this beautiful world.

The path weaved ever up and the hedges grew higher but before long we reached the top and the views changed again.  All around it was just magnificent.  To the right rural splendour, crops and cattle and on the horizon we could just make out the sea.  In front of us the green lush valleys and to the left the mountains we’d been wowed by all morning. The sky was the perfect shade of blue.  The air the perfect mix of cool yet warm.  Honestly it would be difficult to imagine a more perfect camino day.

We pulled ourselves away.  We still had kilometres to go before we could stop.  In true camino fashion what goes up must also go down.  Our trail led to a road which in turn led us through a chestnut forest and lots more down.  I’ll need to check but I felt that we were walking along an ancient road.  It reminded me very much of the old roman roads we followed on the Via de la Plata?  I’m sure that it was old and still very pretty, even if it was a little hard and uncomfortable under foot.

Gerry said he needed a break and we were both surprised that we had been walking for 3 hours.  We met our Swedish friends at the edge of a village, they were finishing their break so we waved them off and settled down for a rest under several oak trees shading a very nice picnic table.

However the break was cut short because shortly after the boots off we were joined by a little dog, then another little dog, then a German Shepherd and finally a typical Spanish mastiff type dog.  To be fair they just meandered over and looked at us as if to say… Anything for me?  But I can cope with one… Two will be OK… By the third I was feeling a tad unsettled and by the time the mastiff joined the party I left Gerry and moved on. I sat on a wall away from the picnic spot and waited for him to join me.  And we wandered on through yet more rural splendour.

Finally we arrived at a village with services.  The four Spanish guys, our Swedish friends and the young German were already there.  We ordered some drinks and settled down for a rest and munched on the sandwiches we’d made last night.  We all agreed today had been amazing.

After a rest and a little wheeling and dealing to gather together much needed cash we booted up and continued on for the last walk of the day.

The stage ends at Borres but we walked 2km further to an Albergue on the edge of the split for tomorrow… It was 2km more up but tomorrow is the big day over the mountains so we felt it was a good choice.

As I type this I can hear the other  pilgrims discussing which route they will take.  We want to climb over the top but rain is forecast.  Some are taking the lower route but they have more time and can be flexible.  We are keeping our fingers crossed that the weather holds enough for us to cross.  Time will tell but regardless, today will go down as one of my all time favourites… Wow it was beautiful… And for a short day my fitbit still says 19.3 kilometres. 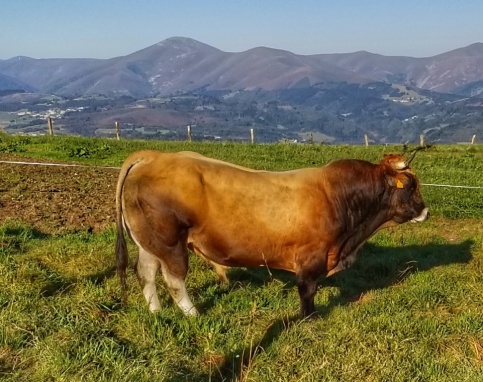 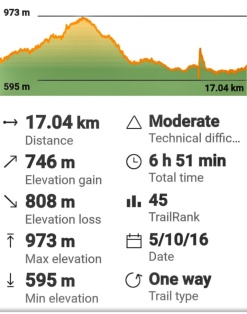