Last night we wandered back into the town centre for dinner in the main plaza.  We were joined by a fellow Pilgrim from Germany and we talked about life and family and politics and Brexit.  It was a lovely evening and once we’d finished we said our goodbyes and went off to our albergues.  Back in our room we met our new room mates, charming ladies from Germany and Hong Kong. After chatting and exchanging tips on where to stay and eat and visit we settled down to sleep… And sleep I did!

We had breakfast in the albergue before setting off just as the morning sky was changing from black to grey.  Rain was forecast but it still looked dry which was good news as today was another hard day with lots of steep ups and steep downs.

We started with a long climb which never feels so bad on fresh legs. Up and up we went again until Grado was hidden under the low clouds.  The higher we climbed the better the view and we kept looking back watching the sky turn to orange and peach.  There were grey clouds but the rain stayed away.

As we walked a farmer greeted his five cows.  They were lined up by the gate, ready to file out for their walk to the milking shed.  Gerry quickened his steps but I stayed put.  “gosh you’re brave” he said but I wanted a photo.  Any maybe not so brave because I stood behind him as they passed.

As we huffed and puffed our way up the hill we were overtaken by three old chaps out for their morning walk.  They shouted to a friend working on the farm and a few laughs and comments were exchanged but crikey they never broke their pace.  Poco mas poco mas they called back as they strolled on… Only a little more.  That burst our bubble just a little that we could so easily be overtaken… Hey ho we got there but our fellow walkers were long gone when we reached the top.  And of course what goes up must come down so once we admired the view one last time we headed down.  I hate the downs more than the ups.  Toes push hard against the inside of your shoes and your knees groan with every extended step.  But this was at least a service trail so quickly we were down and in town.

Pilgrims we shared breakfast with were either already enjoying a break or followed us into town.  It’s good to be in the company of pilgrims again.  Spanish, Dutch, German, Danish, Italian, Brazilian and British… No doubt more that we’ve yet to meet.

We stopped for a coffee at the half way point.  A shoe break before tackling the next big hill.  Up and up again, sometime gentle and sometimes steep but always up.  We meandered our way through tiny neat hamlets; if you only know the Spanish Costa then you may not have discovered these beautifully neat houses.  Gardens  neat, wood piles neat, little or large veg plots all neat.  I joked with Gerry that I could  never ever live here because I wouldn’t be able to keep up with all this neatness.   We passed an old couple picking walnuts… She picked and he swept behind her.  We leave our walnut leaves to fly on the breeze!

So we continue up.  The sun came out and it was time for a break.  We’d bought bananas at the coffee stop so we searched for a suitable place to munch.  We spotted a low wall.  Not a bench but Mr Sims has learned to be less fussy.  We settled and started our snacks but the banana was so hard that we literally crunched our way through it.  To add to the ambiance a dog in the house opposite us stirred and barked and barked and barked at us.  We gave up and moved away.

On we walked.  The later part of the day was more gentle.  It was still up but not so steep.  Except sometimes.  The path was mixed.  Some road.  Some trail.  Some stoney trails littered with tree roots which made for interesting walking.  Sometime the path is wide and other times its so narrow that the nettles and brambles are snapping at your ankles.

Gerry declared that if this is a hard walk then surely we must have served our apprenticeship today, and he has a point!  We stopped beside a vending machine for cold drinks. Our German friends were just leaving so we exchanged hellos and goodbyes and places.  We sat and just enjoyed the peace and they walked on.  We had only 3km to go but they had  another 11km so it’s unlikely that our paths will cross again.

Once we were refreshed we picked up the trail one last time.  A final kick of a  hill to test our tired muscles before arriving in town.  Our albergue tonight was just the other side of town so we stopped first at the bar.  Gerry ordered a sidra but instead of a glass he got the bottle.  He staggered up the hill to the albergue, smiling to himself all the way.  I showered and he just lay his head on the pillow to sleep off the cider and the hills.

My fitbit says 26km today and gosh they were tough kilometres but stunning nonetheless.  And it never rained so all in all another fabulous camino day. 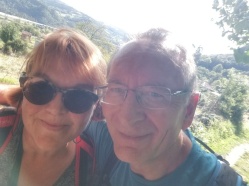 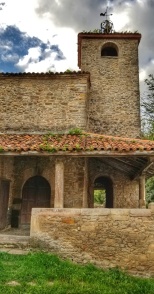 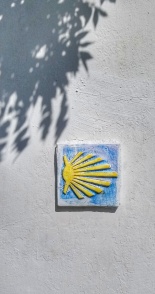 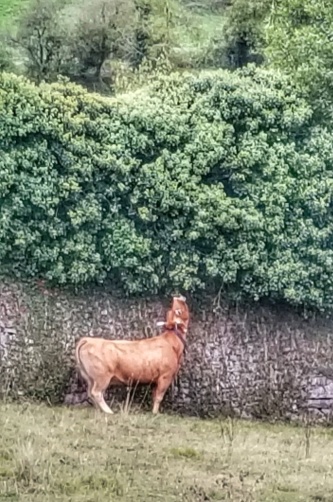 5 thoughts on “The Apprenticeship”