The communal meal last night was a bit of a damp squib. Not because the food was bad… But sadly no-one wanted to be very sociable.

There were a dozen pilgrims around the table but only three would chat. The French at either end just wouldn’t engage… So it was a muted affair. The German lady beside me was very nice… She is retired and has walked all over Europe. Opposite was a very smiley Croatian chap and a nice but shy German girl. So it was a pleasant meal but nothing exciting.

We walked around the village for a while before retiring to our bunks around 8:30. Our end of the room was all girls and it was jovial. I was asleep by 9:00 which was just as well as the two girls from Sydney got up at an hour that began with a four!!! And did they sneak out… NO! They unpacked and repacked their bags… Stuffed their sleeping bags noisily into stuff sacks… Oh and chatted merrily… I could sense the tension in the room fizzing away but no one said anything until they left. I snoozed for a bit after that but the Croation guy turned the light on at 6:15 so we all got up.

Breakfast was laid out in the dining room… Toast, cookies, cakes, bread, jams, tea and coffee and juice… Not bad for 3 euros.

We left at a very respectable 7:20. Just before leaving I caught sight of myself in the mirror and realised to my horror that I was very sunburned from yesterday’s walk.

I am using cream but obviously not enough. I changed into my long sleeve top and slathered on more factor 50. And off we set.

We walked up to the high meseta and again we had snow capped mountains as our companion this morning. They look so spectacular on the horizon. The morning air was cool but gosh when the sun was up it was hot. The birds chirped and cheeped and the ants busied themselves and bees buzzed but I was hot.

We stopped for a boots off at Hontanos… Things have changed in the last four years and the services have grown in this little village! I had a yummy slice of tortilla patata and a cold coke. We wiggled our toes in the shade and chatted with fellow pilgrims… Dutch, German and Americans… But we were only half way to our destination so off we set again.

This time it was too hot even with sun cream so I draped my scarf over my head and neck and slathered more cream on the sore bits. That worked and kept me covered for the rest of the walk.

As I walked I remembered the incident four years ago with the red scarf and I had a pang of sadness for the pilgrims that shared that journey with me… I really missed them. I filled my thoughts with those jolly memories and a before I knew it we had reached San Anton… Well his ruins anyway.

We picnicked on banana sandwiches and water in the shade… alongside 4 Germans and a Kiwi … once finished we bade them farewell and carried on. Gosh it is hot.

Castlejerez sits on the horizon for ages… At the end of a long straight road. We passed a couple of albergues and we were tempted to stop but there’s a big ol’ hill to climb tomorrow and we wanted to be a bit further into the village.

It’s a lovely little albergue… Spotless and comfy and cool. I’ve showered and done my laundry and now I might go find a cold drink. And you know I said I wanted lots of sunshine… What I meant was perhaps a little cloud? To ease my burning skin? Would that be possible? (Thanks). 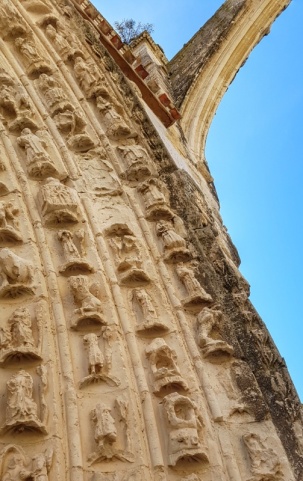 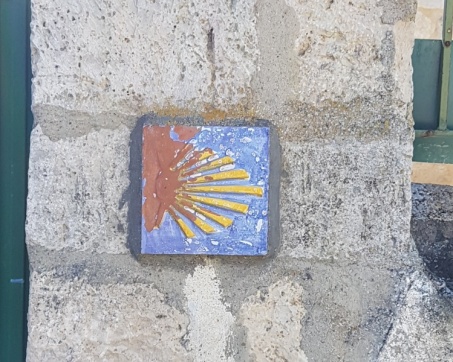 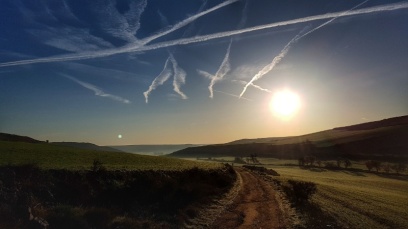 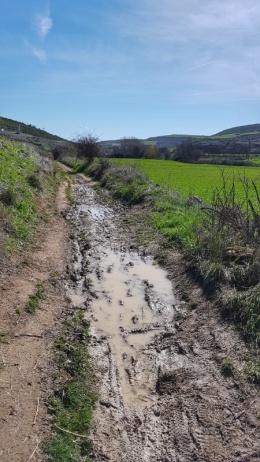 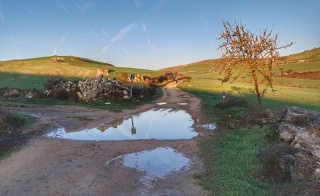