“It has been a terrible, horrible, no good, very bad day. My mom says some days are like that. Even in Australia.”

Ps. To be fair it’s not been all terrible… just the vomity bit.

We have a great afternoon and evening in Salamanca.  After our visit to the Cathedral we decided to check into our new posh hotel… have a soak in a hot bath and wash our clothes and just relax… I might even have had a little sleep. 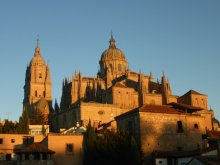 Feeling so much better we went for a wander into Plaza Major… and we bumped into the Bordeaux guys… Yeah! We arranged to meet up later with other pilgrims but sadly we never made it.

We enjoyed a glass of vino tinto in the late afternoon sun in this amazing Plaza … we had one or two tapas… soaked in the sights of this beautiful vibrant city and we watched the sun go down and the moon rise.  We walked out over the roman bridge that has welcomed pilgrims to the city for a millenium… and feeling rather exhausted we decided to return to our hotel. 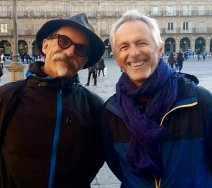 Salamanca, or “Helmantika”, was founded in the 4th century BC by the Celts and Romanized soon after. It was an important link on the Ruta de la Plata.

In the 8th century it was conquered by Musa Ibh Nusair, and Muslim culture took over Christianity.  After the Christian reconquest, the University of Salamanca was founded. which was ratified by Pope Alexander in 1255… one of the first universities in the world… second only to Bologna.

The city and its university reached great prestige at the time and afterwards, cementing it’s place in history.  Today the city is alive with students from around the world… along with coach loads of tourists and a sprinkling of pilgrims.

In the early hours I was sick again.

Maggie also has a bit of a dodgy tummy although she says she feels 100%.  We chatted at 4.00 in the morning about what we should do now.  Salamanca is booked up for the weekend… the remaining  few room options seem to be very expensive.  We looked at moving to Zamora but this is pretty much the same… booked or expensive.  I can’t really stay in an albergue with a shared  dorm and bathroom as it’s not pleasant for me or the other pilgrims and impossible if there’s a queue.

We couldn’t think straight in the middle of the night… so we slept some more.

This morning we decided to bus on a stage to El Cubo.  I am really reluctant to miss stages and not walk but we need to move on… we’re meeting a certain Mr. S. in Orense on the 31st so we have to stick to our schedule… and we need a private room.

There is a private albergue at El Cubo de Tierra del Vino. We caught the bus from Salamanca and followed the path of the camino for 36 kilometres (in the bus) through rather uninspiring flatlands… the walk pretty much summed up how I felt… blah.  We saw the French-Tahitian couple walking but no other pilgrims were on the road… where is everyone?

We reserved a room and we are now in a warm bar where I’ve tried some toast.  I am hungry so I’m hoping this stays put. And I’m really, really hoping that we can start walking again tomorrow… as I am really really fed up and bored with this now… I need to walk.

P.s. thanks again for the kind words… they lift our spirits even when we’re feeling glum. 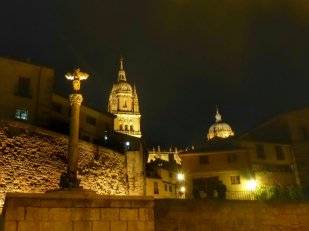