Gerry joined me at the Hotel in Logrono.  He actually bumped into Maggie in reception first before joining me.  But there he was, in his camino gear with his camino rucksack and he was actually going to walk with me!  We headed off into town to see who was around and we found everyone under the shade of a huge chestnut tree enjoying a few beers.

Gerry felt it would be rude not to join in… so he did!  And after we’d have our fill we headed off around town in search of dinner.

It had been a long day and things were changing now.  Noel was staying in Logrono for an extra day (killing time waiting for his girlfriend to arrive).  Verna,  Judy,  Tony,  Lianne and Hogni  were all walking on to Najara… another 30km day that would be too long for Gerry’s first day.   It really feels like I’ve come to the end of my camino and moved into holiday mode… so we all hugged and said our goodbyes and went off in search of our beds.

As we  stayed in a hotel we didn’t need to rush in the morning but we were still up and out before 8:00am.  We got lost almost immediately… I’m saying nothing but it’s odd that as soon as Gerry is here it all goes to pot!  But I forgive him because he bought me breakfast.

I have to explain one of the photos I took today… Gerry wanted his photo beside a giant bottle of wine… as you do!  He said is my hand on the bottle and I said yes… it was only later when we looked at the photos that I realised what he meant was… is my hand resting the the side of the bottle.  Sorry Gerry, I didn’t really get what you meant before… and now it all seems so obvious! 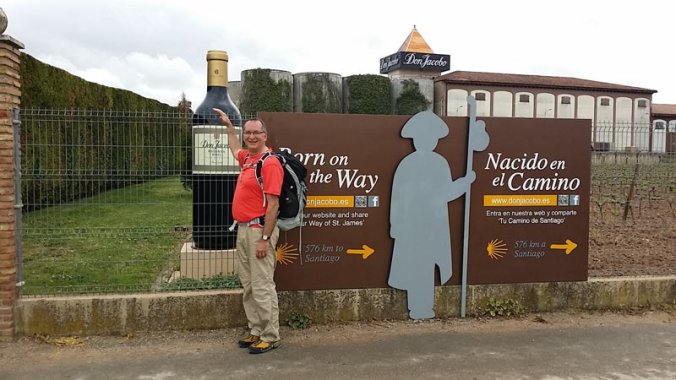 Today we had the choice of walking 29km to Najara or splitting the walk in two and stopping in Naverette.  It seemed only fair on Gerry to break the trip so we arrived early, bought a little picnic for lunch and bagged ourselves a double room in a pigrim apartment.  We didn’t have a private bathroom but there was nobody else around and there were two bathrooms so we took our pick and had a lovely hot shower, followed by a cuppa and our lunch.  And then we headed off into town to see if anyone else had stayed… and of course the bar was full! 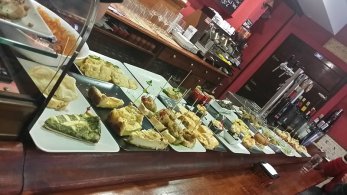 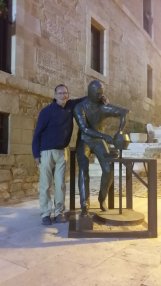 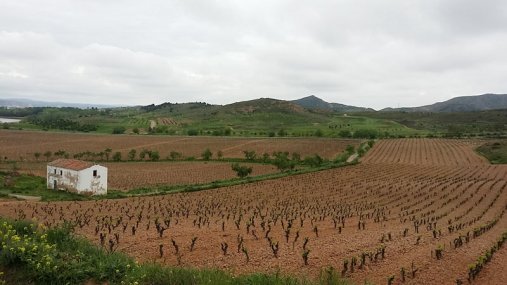