Last night our albergue was first class.  Hotel Miguelin at La Mesa is really not too much further on from Berducedo but oh the beds, the showers and the dinner were worth it!

We thought today would be a shorter walk and although we expected it to be tough we decided to linger a little longer and left around 8:30 after a leisurely breakfast.

As we left the hotel the morning air felt cold.  More mist enveloped the landscape although today it was meant  to be clear?  We knew we had a steep climb out of La Mesa but the sting of the hill was lost as we rose above the morning mist and watched the sun rise over the mountains.  To our left we could see the peaks we crossed yesterday; no cloud for those walking over today.  To our right it looked like a sea of cloud hiding all but the tallest peaks.  All of this was bathed first in the steely grey of pre-dawn and then the apricot glow of a new day.  It felt good to be walking in colour again. 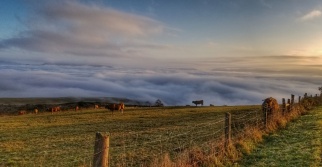 Up and up and a change in direction.  The windmills that yesterday were hidden today spun happily against a blue sky.  Cows grazed on the slopes above the sea of cloud… A few even stopped to say hello.  We could feel the sun on our faces and very quickly coats and scarves were tucked back into our packs.

Unlike yesterday’s walk today we had a long hard descent.  I hate the downhills far more than ups, memories of my fall on the Rota Vicentina leaves me nervous and lacking the confidence of others.  It didn’t help when even the guide was in red warning of the dangers.

As we approached our turn we read a sign warning of deviations because of forest fires and dangerous sections?  I thought back to another day in the mountains around A Gudina and the high speed train link and hoped there would be better marking and less confusion.

The pilgrim ahead of us ignored the bright yellow arrows that took us off the road.  What did he know that we didn’t?  Was this a wrong turn?  Should we stay on the road?  We decided to follow the arrows, after all the guy in front might not actually be a Pilgrim!

As we followed the path turned into the trail and before we knew it we were once again shrouded in mist.  The sun, her warmth and colour dissolved into the grey.  A few pilgrims walked by, striding forward with the confidence I wished for but very quickly they were gone, lost in the mist.  I said to Gerry that in my head I was singing Into the Mystic… And that was enough for me to find it on Spotify and play.  The music lifted our pace and as it played we walked down and down.  First to the right then switching and walking left… And repeat and repeat… Slowly slowly walking down.  Van Morrison drifted through the trees and every now and then patches of pink heather or yellow broom brought colour to our grey world.

More pilgrims passed.  The Polish girl we met at Samblisimo. The four Spanish guys that we met at one of the first albergues.  Then the other Spanish guys… These were younger (and one was actually from Peru) and they brought chatter and laughter with them until they too were swallowed by the grey.  Then the Russian guy and the chap from Brighton (I’m sure I know him but I can’t remember how)… On we walked down and down until the mist cleared and we could see the reservoir below.  We’d been walking for so long already and yet it was still so far away!

The path changed into a service track.  Instead of going down and switching back the path went straight.  We could see our Swedish friends on the other side of the ravine so we guessed we would just keep walking… And sure enough not long after we were in the same spot.  The Spanish guys stopped to view the dam and we took a selfie of us all… It took a few attempts as we talk in French to one guy and he translates it to Spanish for the others… Our conversations are slow but always jolly. 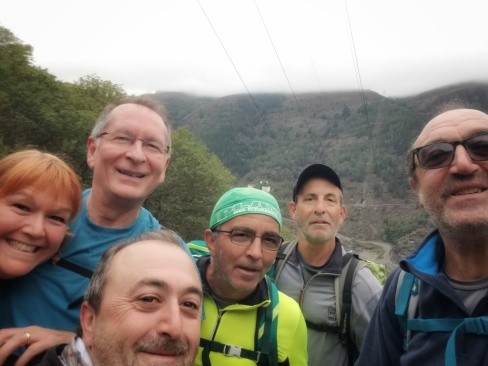 On we walked and it felt like we’re were alone on the side of a mountain.  Any noise that we made seemed to rise up the steep sides of the valley and disappear.  I said to Gerry that the acoustics here would be great so I tested it by singing a song for him… One of his favourites… Lovesong by Adele… As with everything else her lyrics drifted up into the mist too.

Onwards we walked.  The young German couple passed us but they never speak.  We stopped often to peep over the edge.  The rocks are a mix of grey slate with bright orange rust from the iron content.  The Spanish guys told us there was an old iron mine here once and the ore was used to help armour German tanks in WW 2.

The path changed again.  Another diversion for our safety.  More switchbacks.  Down and down we went.  I don’t know if yesterday’s walk was catching up but gosh our legs ached with these downs.  Finally though we reached the road and then the dam and the bottom.

Of course there was only one way to go from the water… But 1km up there was a hotel and we stopped for large hot cafe con leche and changed our shoes.  Kjell and Gula were already there.  They had decided to walk a little further today than us which is a great shame as we’ve enjoy the company if our Swedish friends but I’m hopeful that our paths will cross again before Santiago.

We expected a reasonably easy walk to Grandas de Salime but it wasn’t quite as short as the guides had promised.  We followed the road back up on the other side of the valley and we could make out the path we’d followed all morning on the other side.

Up we went and our legs felt stronger, these roads now seem to flatten out as we climb and we no longer need to break our pace.  We criss-crossed paths with the Spanish/Peruvian lads and the 4 Spanish guys… They aren’t faster than us but we stop to admire the views a lot more than most.

Finally the arrows took us off the road to a trail.  We expected a nice easy roll into town but crikey it was far from it.  Hard steep up, really having to dig in and push upwards but thankfully only for a short while.  We’d been taken up to what was perhaps the old road… Built for carts long before the new tarmac road existed.

You could make out cobbles, large centre stones and terracing and dry stone walls that would have once lined this path.  Trees had grown up alongside and their old roots now pushed up through these old stones.  Centuries of leaves and debris had perhaps rolled down and encroached and covered the edges but still, even with all this change, the path remained.

My thoughts drifted.  The quiet of the forest and the tempo of our pace let’s your mind wander.  Those who know me will know my father died this year.  They’ll also know that he was a terrible father and his death opened memories that perhaps would be better left buried by time.  This path reminded me of that.   Time smooths the edges, things that were once clear and sharp lose their clarity. What could once cut is smoothed round by time.  New roots loosen objects that were once fixed firmly in place.  What was is no more.  What has been has been replaced with something wonderful.  I lost a my dear friend and walking Buddy a few weeks after my dad.  I pushed my father’s death from my mind as Jaqui meant so much more.  Somewhere inside I’m trying to greive for him and for the childhood long since stolen… This path made me realise that maybe I don’t need to.  I’m not obliged to mourn.  Maybe I should let nature continue to replace and renew.  The path has survived all that nature has thrown at it and it’s still there waiting to be discovered by pilgrims with tired legs.  Those thoughts brought considerable comfort.

It was only 1:30 when we arrived in town.  We could have walked on but we’d already booked a pension and it felt wrong to cancel.  The rest will do us good although this room is not a patch on yesterday’s and I felt a little sad that our friends were all walking on.  But Gerrys ankle is a little swollen and looking kind of bruised.  It’s been OK today but rest was the right choice.  We have more two hard days of walking ahead before we’re clear of these mountains.

We showered and ate chocolate and crisps for lunch (note to self… Don’t send Gerry to buy the picnic again!) I’m looking out of the window and I can’t believe that not that far away I can see the windmills from this morning and the mountains that we walked down… It looks so close but it felt like a world away!  Hey ho… They’ll be gone from view tomorrow for sure as new horizons will fill our skies!

6 thoughts on “Into the Mystic”