The most popular route to Santiago de Compostela is the Camino Frances.  The route starts in Saint Jean Pied de Port and leads over the Pyrenees to Roncesvalles and then from Roncesvalles on to Pamplona.

But, this isn’t the only route to Santiago de Compostela and Saint Jean Pied de Port isn’t the only starting point.  The oldest route into the kingdom of Navarre is the little know Camino del Baztan.  The route is 106 kilometers long and passes through beautiful Basque countryside, the monasteries of Urdax and Belate and many picturesque villages. It starts at the Cathedral in Bayonne and winds its way over rolling hills into Navarra and onto Pamplona.  Once in Pamplona, pilgrims join the Camino Francés for their journey to Santiago.

Living in France provides us with easy access to many beautiful walking paths (including the French side of the Pyrenees and Bayonne).  We often look for short walks and it was during one of these searches that I discovered the Camino del Baztan.

We’re now really hoping that our schedules will allow us a week in August.  From all I’ve read this is a beautiful little camino and it would be the perfect training for our Rota de Vicentina in the autumn. 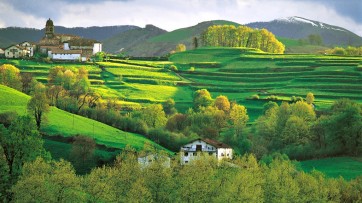 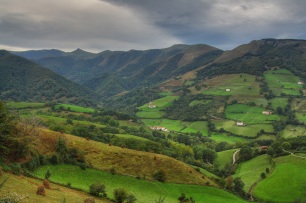