Yesterday’s choice was a good call.  It was warm, we washed and dried all our clothes, socks, boots, insoles and coats… Even my rucksack had a spa treatment.  We both had a long shower in our own little bathrooms and my hair saw a hairdryer for the first time this week. All in all a perfect stop for pilgrims.

Sheila bought a bottle of Rioja.  Sadly when we returned to our apartment there was no bottle opener… Shock Horror!  Their was only one thing for it… Sheila went back to the bar and asked them to open it and whilst there  had a quick beer and tapas because it would have been rude not too.

So we ate and drank (wine and tea respectively) and went to bed.  Sheila said that she would like a coffee before heading off so we agreed to go to the bar at around 7:45 and get on the road around 8:15.

My alarm went off at 7:00 and I gathered my things and knocked on Sheila’s door.  I made toast and tea but Sheila came into the kitchen as said she didn’t want to leave.  She said she felt warm and comfortable and she really didn’t know where she would walk today. She said her feet were sore and she thought she might have a blister.  I suggested Arcade as there is an alburgue and a hotel but she just told me to go on without her because she didn’t know.

I know that she’s found being in alburgues difficult.  They aren’t for everyone.  We’ve had awful weather and the first two nights were very cold and then we had our long hike in the dark to Ponte de Lima.  Added to this we walk at different speeds and she said she finds this difficult.  (although you should always walk your own pace to prevent injury or blisters) Anyway I’m guessing this has all been playing on her mind.  Last night she said she really did not want to stay in another alburgue. This morning she sent me ahead. I wasn’t happy and said this isn’t how it should be but she was insistent.

I told her I would wait in Redondella for her and we could decide where next.  I said my goodbyes as she settled down for another cuppa.

I felt uneasy about leaving not least because Sheila left her phone in Porto so is out of contact.  However the road was calling me.  It was raining earlier in the morning but now the sky was clear.  I walked out of town and up into the hills.  The sky was cloudy and I could see touches of blue and the sun was just peeping through the trees. Best of all there were no puddles or muddy stretches.

Up and onwards I walked, through little hamlets and little patches of forest.  All around I could see Galician hills and it just felt good to be walking.  A car pulled up beside me.  I’ll admit I was nervous but a guy rolled down the window, handed me a little prayer and wished me a buen camino.  He waved as he drove away.  Really how sweet is that?  I walked through Mos as the church bells chimed and I was so surprised to see a chap stood up there beside those bells.  I hope he had good earplugs. I stopped for a drink in a cafe and the two guys from the UK strolled by.  We exchanged hellos before they carried on and I drank my coke.  It was raining a little when I stopped but cleared by the time I set off.

Onwards through little towns, suburbs maybe of Redondella?  Settlements followed by forest followed by settlements.  Redondella is at sea level and the trail popped me out high on a hill with wonderful views of the town below. Down and down I wandered and in no time I’d arrived. 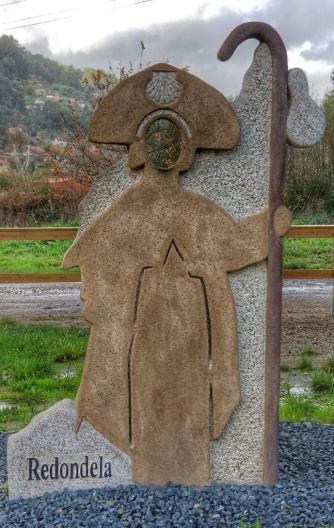 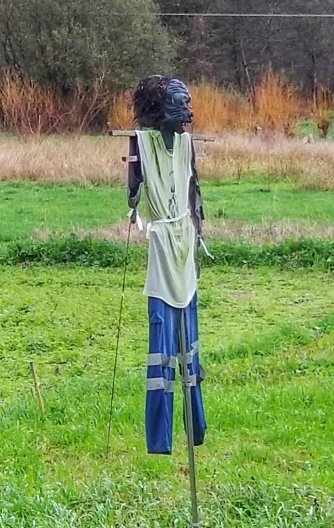 I’d told Sheila I would wait at the first bar and I found a seat with a good view of the path.  I had a coke and a little gift of local cheese.  I chatted with Gerry for a while and listened to the music… It was like an 80s playlist and I hummed along to Spandeau Ballet and Cyndi Lauper.  I waited an hour before sending Mike (Sheila’s husband) a message.  I had told Sheila that if she hadn’t caught me up I would do this.

The guys from the UK walked by.  I asked them if they’d seen Sheila and they hadn’t.  There was nothing for it than to carry on.  It was a beautiful day and I’d arrived at 11:30 so it was far too early to stop.  The UK lads said they were walking on to Arcade so I said I might see them later.

I meandered my way through Redondella.  Did I say already that it  was a beautiful day.  I cannot believe how different it felt from the previous few days.  On and on and up and up I walked.  I remembered this section from two years ago when walking with Jaqui and Sara.  I felt like the hills were easier for me this time around… It must be my Primitivo legs.

It was hot.  I’m not complaining but I was hot.  I stopped at a picnic spot at had a drink and removed layers, I was glad I brought that tee-shirt with me now.  Oh it felt nice to be warm and not walking in puddles.

I carried on up and up the hill and as I cleared the top I could see the estuary below.  I sent a photo to Gerry and we chatted as I walked.  He told me he was tracking me via my phone and could see where I was.  Then he added I hope you don’t think that’s creepy.  He said that he’d been so worried on the late Ponte de Lima walk that he found out how to track my phone.  I didn’t think it was creepy, actually it felt nice knowing that he knew where I was.  I do so miss him when I walk so I’m glad he’s in my pocket keeping me safe.

Before I knew it I’d arrived in Arcade.  The alburgue is attached to a hotel but that was closed however I could have a private room for 25 euro.  Perfect.

I sent Mike the details and dropped my pack before going to explore.  I’d walked 22.5 km but I felt a few more wouldn’t hurt.  I wandered down to the water.  Wow it was beautiful… A little windy but wow so pretty.  It felt good to see the water and feel the sun on my face.  I wandered around for a while before deciding I was hungry.  It was 15:00 and I’d still not eaten.

I found a restaurant and ordered an omelette and fries… It was huge so that’s me sorted for the day. I sat and looked at my photos and ate and watched Harry Potter on their big screen TV. When I left the restaurant I noticed puddles… I’d missed the rain and folks were just dropping their umbrellas.  Lucky me!

I wandered back to my room and managed to find Harry Potter on the TV… Luck really was with me today!

Mike called to say Sheila had stayed in Redondella and was fine.  We’re ahead of schedule and now half a day behind but she’s going to have some shorter days and find small hotels.  She did say she had blisters so perhaps a slower pace and no dreaded alburgues will be just what she needs.

I was always planning to come alone on this camino so I’m also happy and Sheila says the UK guys stayed with her so I know she’ll be fine too!

I walked 25km today… And I have to say they were bloomin lovely.  I love this autumn sun and getting into my stride.  My app says only 76km to go!  Can that be right?  Just a few more days on the road.  I have to decide tomorrow if I will walk the variente?  I’m thinking maybe it’s not a good idea after all the rain we’ve had.  It’s beside a river and it felt good not having wet muddy feet today.  Perhaps I’ll save it for the next time.  Gerry likes the idea of a coastal/central combo so I can see a third walk on the horizon!

Buen Camino all… I hope your day was sunny too!

4 thoughts on “A Bump in the Road”