Last night’s hotel was fabulous, really if you are ever in the area go and stay.  It is off the camino but there was a regular bus and the walk back this morning was so easy.  The beds were so comfy, and bath towels you could wrap around you like a huge fluffy sarong, sheets of crisp cotton and even bathrobes and slippers.  And the breakfast that would rival a parador.  And he packed us a little picnic as a bonus. And they gave us a bottle of juice and water and tiny jars of local honey.  And all for just  the 45 euros inclusive of all.  It was a little gem of a hotel!  Its called Casona del Conde and its in Norena… Fabulous!

So today was short, which was just as well after yesterday’s efforts.  We walked back from the hotel and rejoined the camino at El Berron and continued along what felt like 15km of suburbs.  Very large modern houses mingled with older properties, some renovated and some abandoned.  Every now and then we were thrown back into rural splendor but quickly we were back in the suburbs.

Many houses had large mastiff type dogs that would bark to varying degrees as you walked by.  Some just raised an eyelid and mumbled some kind of ruff… Others were far more enthusiastic.  One poor chap popped his nose through the fence with a paw either side.  He yelped almost pleading for a nose rub so Gerry obliged. This was a bit of a mistake but not because the dog grabbed his hand… But because the poor thing yelped for more attention as we left and we could hear him yelping for ages as we walked away. At one house three naughty dogs had managed to find the bread delivery and just the torn bags and crumbs remained as evidence… Someone would wake to no toast for breakfast today.

So on we walked through the suburbs.  Gerry felt a blister forming on his toe so we paused by a church and sorted this before once again wandering on towards Oviedo.

We walked by a rambly house, it looked like it needed renovation but who ever lived there didn’t care. It had a kind of hippy vibe about it and as we approached I heard beautiful music.  The marvels of smartphones meant I could stand outside and Shazam it… Et voila… Prometo by Pablo Alboran.  You know how music can speak to your soul?  Well this spoke to me.  I found it on Spotify and we walked along in silence lost in the music.

There were no services until just 5km from the end.  We’d agreed to stop at the first bar but it didn’t look amazing but we agreed so in we went.  They say you shouldn’t judge a book by its cover and they’d be right.  Outside was a little shabby and inside had seen better days but we had two steaming cups of perfect Spanish cafe con leche, two slices of homemade lemon sponge served by an old chap with a huge grin… All for the princely sum of 2.60 euro.  As I can no longer eat gluten Gerry decided he’d better eat both slices… Is anyone surprised? 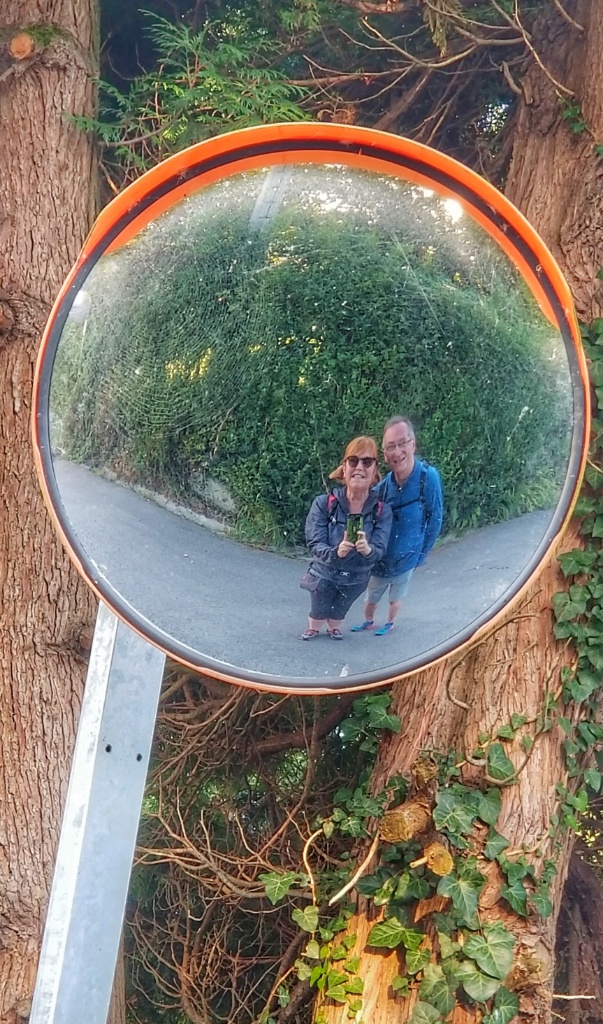 On we walked through the industrial outskirts of Oviedo.  Slowly industry turned to residential and fathers pushed daughters on swings and grand parents smothered grandchildren with Sunday morning kisses and the kilometres slipped away.

It was an easy Sunday morning kind of walk and by midday we were in the old town of Oviedo.  I stopped in the first old building inside the city walls, the Benedictine Monastery of San Pelayo.  Inside a Sister stamped my credential and tried to explain the history of the building and the Saint.  Some we understood but much we didn’t, however her kindness and patience was clear and we thanked her warmly for her time.  We stopped for our little free picnic and waved to other pilgrims as they arrived.  We wandered into Plaza de la Catedral and visited this magnificent building.  The Sunday Mass was drawing to an end and as we entered a nun sang… More music to feed the soul.  We stayed for a while before slipping away back into the plaza.

Oviedo Cathedral has ancient links to the pilgrimage of Santiago.  It has been said… Who goes to Santiago but not to Salvador, visits the servant but not the Lord.  The cathedral is the image of the heavenly Jerusalem, which is spoken of in the book of Revelation: the heavenly city whose gates are defended by powerful towers and which descends beside God as like a bride adorned for her husband.

For us, it is the start of the Camino Primitivo. But that is for tomorrow.  Today we went in search of our hotel.

Once settled I googled the lyrics for Prometo.  They made me cry.

It was a lovely walk through the suburbs.  The quiet still of camino mornings seep into my heart and the dark corners of my mind.  Beautiful music can still make me cry but on these trails I hope the tears are cleansing.  I hope your Sunday was as gentle as ours. 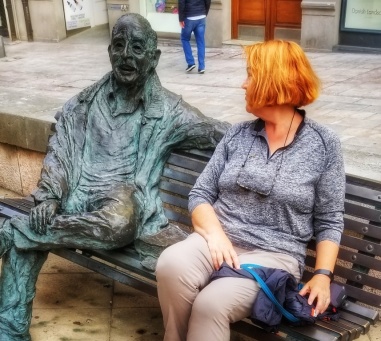 6 thoughts on “The Suburbs”