We wandered back out into Bilbao’s early evening bustle. As usual the streets were awash with noise and colour and movement. There’s a strange mix of people; elegant locals drinking wine or coffee in the tiny bars that line these narrow streets, a good number of young student-looking types hanging out in the trendier places, a fair sprinkling of tourists (complete with guide), the odd pilgrim here and there and plenty of families with young children. It seems that there is a place for everyone in Bilbao!

We wandered the streets that surround the cathedral, each one the same yet different than the last. In one there was a definite hippy vibe and we giggled as we window shopped at the local Mod store; who’d have thought Northern Soul made it to the Basque Country! 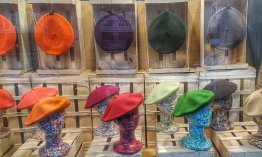 Eventually we found ourselves back in Nueva Plaza and we settled on a table in Cafe Bilbao; this bar appeared in all the good foodie reviews. At first glance it was full… Not even standing room at the bar. We turned to leave and a waitress looked at me and said “it’s too cold outside”… And she was right it’s definitely cooler when the sun goes down. “Would you like to sit down?” She asked “I have tables upstairs” “yes please” we said and we followed her up… Into an area roped off from the world. Up we went looking down on the square, alone in this lovely old building. She asked what we wanted… Or we could let her choose… We opted the latter. She returned with four little Pinxos each… All different and ooooh so lovely! We sat and dined and chatted and planned and people watched from our private dining area. Eventually we had to drag ourselves away and head back to the hotel. We’ve already agreed that we need to come and visit again!

I didn’t sleep well. I couldn’t get comfortable and so kept waking. I’d doze for 20 minutes and the wake up again. This cycle seemed to continue for half the night. At one point I checked the time and when I saw it I thought of my pilgrim buddy Maggie… I think she calls this an angel number but I have no idea why!

I must have drifted off after this and woke again around 6:30 am. I closed my eyes and snoozed for a while until Gerry stirred. What I really really wanted was a cup of tea and I wondered if I closed my eyes tight enough and wished really really hard, maybe one would arrive. It didn’t. But you knew that didn’t you. ( I’ll let you into a secret… Every morning at home Mr Sims brings me a cup of tea in bed… Honestly how sweet is that!)

We showered and packed in silence. Both still tired and both dreaming of tea. Once done we headed back to the streets of the old town. We had breakfast in a little cafe in behind the cathedral… It was a whopping 13:50 euros… It was very nice toast but crikey it was a bit pricey. Poor Mr Sims is still muttering about it!

Today we had choices. Walk to Portugalete or walk around sight seeing. We chose the latter. We meandered around the old town, back to Nueva Plaza and out to the river. We crossed the bridge and walked along beside the Nervión river to the Guggenheim museum. Incidentally the source of the Nervión river is Burgos. It flows into the Estuary of Bilbao and out into the Cantabrian sea.

The Guggenheim Bilbao’s building is almost as famous as the art that it houses. I wish we had longer to discover all it had to offer but time was pressing and we allowed ourselves an hour. After this we wandered through the Casilda Iternzar park, down along the river to the Maritime Museum where we stopped for a drink. 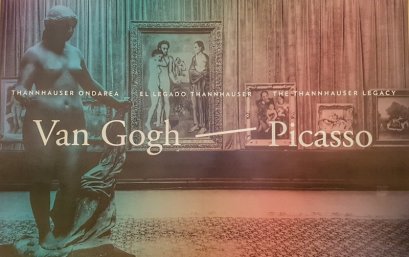 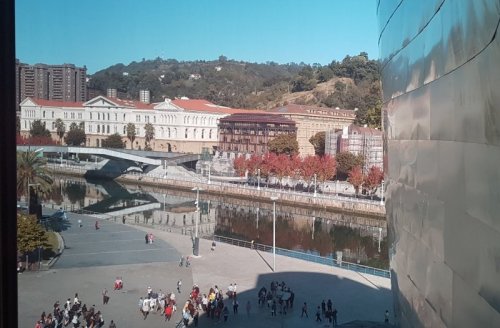 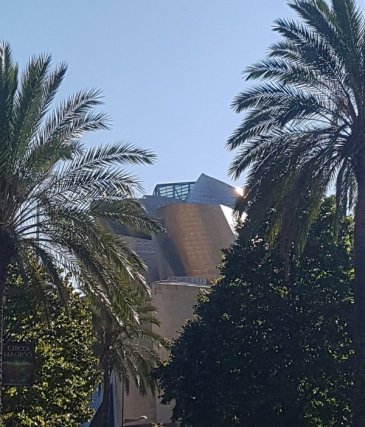 Next we walked back through the modern part of the city, wide boulevards lined with glitzy shops and tree and flower lined avenues with shady benches to sit and people watch. Eventually we found ourselves at 74 Gran Via and our bus stop. It was time to move on.

Portulagete is about 12km further down stream at the mouth of the estuary. In the 1300 and 1400s it rivalled Bilbao as a major port. These days it’s famous for its transporter bridge, now a UNESCO world heritage site.

The city has the Vizcaya Bridge, a transporter bridge. The car ferry is suspended from a frame by wires attached to wheels on tracks above the cabin and moves from one side of the River Nervión to the other (Getxo) via a traction system.This bridge was declared a World Heritage Site on 13 July 2006.

Lucky for us our hotel overlooks the bridge, the river and the more traditional ferry. We checked in, dropped our bags and went exploring. First along this left bank suburb, we caught the ferry boat to the right bank. After a little look around on that side we caught the transporter back again. It was actually all very exciting! (I’ve even got Janis Joplin lyrics above my oh so comfy bed!)

Back on dry land we also went exploring the old part of this small town. But we had to start at the top and work down because Gerry had fallen in love with the street escalator! So… Up we went! Only to walk down again… But no worry… There was an escalator to take us back. I reckon he’d still be there now if I hadn’t dragged him away.

So after a day of exploring we decided to buy a picnic tea… salad, avocado, olives and tuna… With peaches and yoghurt for pudding. Mr S found a bottle of local cider but he had a hang over this morning so I’m not sure that’s the best idea!

We’re back to the coast to tomorrow and I’m very excited to see the sea again… I think there could be more paddling! 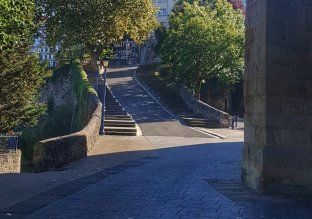 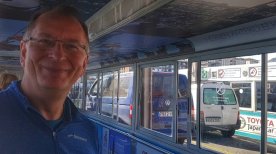 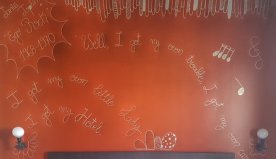 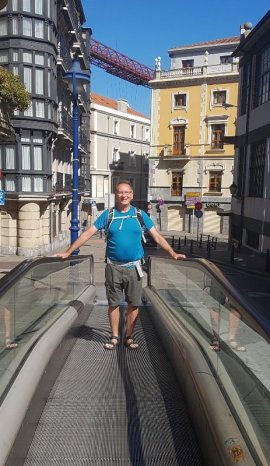 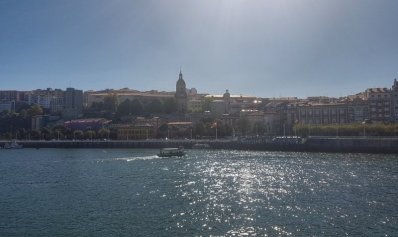 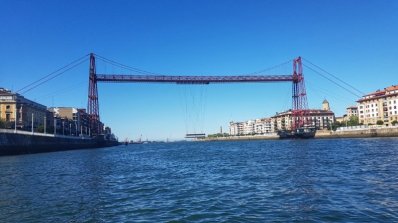 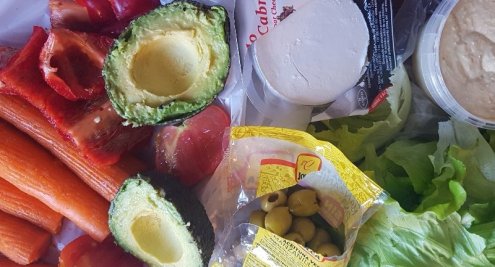 One thought on “Walking Tourists”