Oh my word. Where do I start? We had a nice little stroll last night before dinner; I think we encountered a full set of farm animals! The Suckling Pig was off the menu but no matter we had a pleasant meal. We retired, hoping that a good night sleep would ease Mr S out of his cough and cold and back to walking.

Mmm… Firstly… don’t ever say to us “hark do you hear those lovely cow bells in the hills”! Below our room, albeit three floors down, half the town’s youth gathered for Friday night pizza and beer. It started around 10:00 and ended sometime after midnight. It was then that we really noticed the bells. We’d been wound up quite nicely by the party so by 12:30 we were in quite a state of dispair. At 1:40 am I actually Googled “do cows ever sleep”. Because I honestly thought they were going to munch and clank all night. thank God I remembered I had earplugs… I must have dozed off pretty quickly after that.

I woke sometime later feeling cold but it was so quiet everywhere I was happy. I pulled the blanket over me and turned over to go back to sleep… I was aware of Gerry stirring but was too tired to ask why. Ten minutes later the alarm went off. I turned over and groaned at Gerry. He looked at me and said “am I allowed to have my blanket back now? Apparently I’d swiped his instead of mine and he lay there cold and dazed for ten minutes not quite sure if he should swipe it back… I’m still giggling about it as I type!

We readied ourselves for the day before trotting down to breakfast. We convinced ourselves we could smell bacon and were crushed to find toast and cake. We were the only ones there. Everyone was still sleeping because probably they didn’t plan to walk across mountains. I had toast, Gerry a croissant and we took a little cake and a banana for later. There are no buses on a Sunday but with Gerry still bunged up we opted for a taxi to take us to the village of Bolibar; which left us with just 18.5 km to walk. (Laying here now on my bed the just belies the walk we had a ahead!)

First we walked up to the Monastery of Zenarruza. We wandered around but sadly we’d missed the service by 5 minutes so all that was left was the scent of incense. On we walked through a pine forest. There were some ups and downs but on the whole it all seemed good. I’d read last night in Magwoods blog about the descent into Munitibar. Fortunately for us the treacherous steep downhill had been replaced with great wooden boardwalk steps. 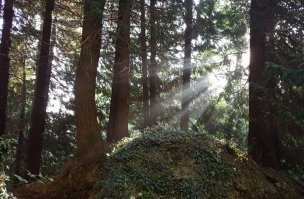 As we wandered into town a chap told us that the second bar in the square did the best coffee. Coffee was what we needed so we headed that way. We’d read that this town was perhaps the very heart of The Basque country; certainly as we entered there were plenty of murals to leave us in no doubt that the locals did not consider themselves Spanish.

As we ordered our coffee we spotted the local guy drinking his. We exchanged a smile and he laughed and said ” you found us then”. He was a local man but had lived in England and spoke excellent English. He talked to us about the murals and the protests. It was a very interesting conversation and I thought about Matt’s lecture… We see life through our own lens. I learned some things from our Basque friend, I don’t profess to understand it all but I was happy to sit and listen to life from his viewpoint.

We finished our coffee and said our goodbyes and headed off up the hill. he thanked us for listening which was nice. It was a steep up but as we headed back down again we agreed that today hadn’t been as hard as we had thought it might be. 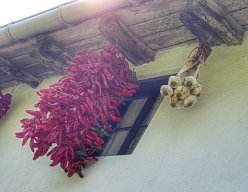 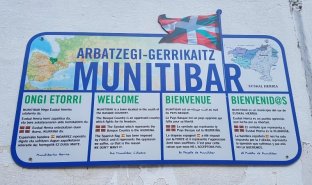 We spotted chestnuts and stopped for a quick munch. Gerry pointed to the view as I took a photo… He said “look at that misty hillock”. I heard ” I am a mister Pillock” which is why he peered into the lense of my camera and ruined the shot… His fault for mumbling is what I say!

A few pilgrims passed us, walking a lot faster but we have our bed booked so we’re happy to stroll. We had hoped for a bar in the next village but it was closed… we did however have a banana and ‘later cake’ from breakfast so we sat and munched on that and aired our feet on a shady seat. Behind us someone was playing really loud lamenting music that filled the valley… It was really atmospheric but didn’t sound at all Spanish.

Rested we moved on. More ups and downs. We passed some cows with bells and we both sighed. They were laying on the grass (cow fashion) and appeared to be snoozing. Gerry ranted at them ” yeah you *******s … You sleep now don’t you… But wait til bed time and you have some system that means one of you is clunking all night long… No wonder your so tired in the day… You eat all night long”… And so he ranted on and on…as we walked by the field. The cows never blinked…I swear one of them smiled. I told Gerry I’d googled “do cows sleep” and he laughed until he cried.

We crossed a 16th century bridge and up a short steep hill to discover an enormous church… Locked sadly, but we strolled around in the cool shade admiring the views. Then on we walked again. Not far now we thought.

First we walked down then up… Then up… Then up… Then up. It felt like the up bit would never end. We were on a forest track and we moved aside as hunters in cars drove by. It was the Camino track and really narrow but they seemed to know what they were doing. Strapped to one of their trailers was today’s kill… A wild boar. It was huge and I have to say it was all rather gruesome seeing the animal like that. A little further on that vehicle had been parked… Boar and all… On the trail. We had to walk by and had a close up view of the spoils of the hunt. We hurried on. Shortly after the path was blocked. One of the vehicles was stuck. After a few attempts they managed to reverse it out and we could pass but just a few minutes further another vehicle blocked the trail. It was stuck too . The remaining trucks all lined up behind. All in all we wasted a precious half an hour in the sun on that mountain waiting as they tried to move the trucks.

We were tired now and just hoping for the down bit to start. When it finally did we kind of wished we were back on the up.

We picked our way down and finally found a bar. It was 16:00 and we’d not had lunch yet… the three remaining Pinxos on the bar looked very uninviting so we had a bag of salted crisps between us… although Gerry tucked in with gusto before realising we had to share… He declared we were considerably under crisped!

We ate and drank and then we carried on. 2km left. All down. As we walked we talked about what had happened in Gernika. One spring day. Out of nowhere. The town was bombed… Destroyed. War. Why? Sometimes the world is such a cruel place.

Guernica (“Gernika” in Basque and “Gernika-Lumo” officially) is known throughout the world due to the painting by Pablo Picasso that bears the same name. The painting shows the suffering and tragedy that Guernica endured on the 26th of April 1937. On that day, German and Italian air forces bombed Guernica, destroying everything but a few buildings. The German and Italian forces were supporting Francisco Franco to overthrow the Republican government during the Spanish Civil War. The city was completely devastated by the bombing and it is claimed 1,654 civilians lost their lives (www.euskoguide.com)

Finally we arrived at our hotel. One last stupid hurdle with an automated check in and a door we couldn’t open. It’s certainly not as nice as anywhere we’ve stayed so far but we’re so tired we don’t care. Gerry is already snoring beside me. He says he’s feeling a bit better… I hope so cause we have more of the same tomorrow! 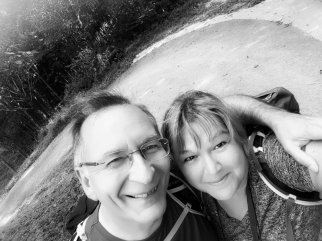 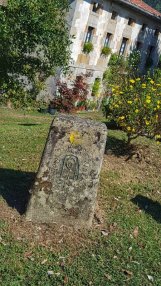 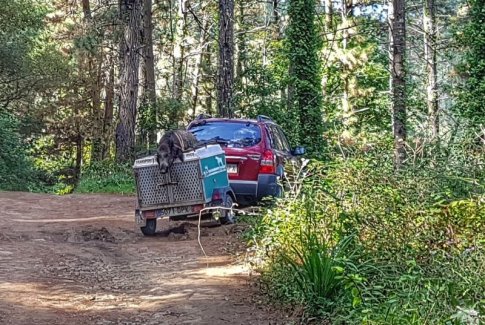