Last night, not having worn ourselves out like the previous day, we managed to do as the locals do and take an evening promenade. I absolutely love the custom. It’s like the whole town goes for a walk; old, young, single, couples, groups, families with children, families with dogs… Everyone is out strolling. And when not strolling they are chewing the fat together over coffee or wine or beer or cake or pinxos. What a wonderful time of day. We decided to join them.

We’ve visited and driven through Zarautz several times but never walked into the heart of the town. We discovered an entirely different place when we stepped back from the holiday appartments and beach side properties. There are shops, bars and restaurants aplenty amidst plazas and old narrow streets. We first oggled through estate agents windows and not for the first time this trip, we were blown away by property prices. It is so expensive here; these properties have London or Paris price tags; San Sebastian, Orio and here… How do local youngsters get on the property ladder?

We wandered on by cake shops and greengrocer’s, boots, bags, and homeware… Just window shopping of course. We watched and walked and eventually we wandered into Musika Plaza, which looked like the ideal place for a pre-dinner drink. Gerry, true to his word, ordered a local white and was pleasantly surprised and I went with a cheeky little cola on ice.

As we looked around this busy plaza we noticed a huge sign hung from a building… Leaving us in no doubt that this was Basque country. Under the sign was another… “269 still not free” it declared. Also draped over the band stand was another huge banner remembering 4 fallen ETA members, with their photos and fresh roses fixed to the poster. We’ve seen many Basque flags, posters and graffiti as we walk it leaves very little doubt that this is Basque country and not Spain.

I confess that I know very little about Basque politics but it started a conversation. What is gained by separation? To our everyday lives what would be different? There would be change, some jubilant and some chaotic but after this initial furore, What? I don’t have any answers? I dont even really understand the question. I said that we couldn’t begin to understand their veiwpoint because as a nation we’ve never really been governed by a foreign power… Unless you count Brexit, and it’s no secret that we would prefer to stay. Brexit aside, as English folks, we don’t know nor can we understand oppression or simply the desire for independence. What drives or fuels organisations such as ETA? Clearly in this little square, in this little seaside town in northern Spain there is a real sense of Basque identity. I should stress I’m not making any judgements, I just don’t understand it and it was an interesting observation and an unexpected show of nationalism and identity.

It was curious that later when talking to Matt he said his lecture had been about how we see things through our own lens… And we do and that lens will shape and colour our view. 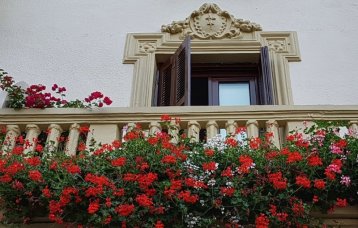 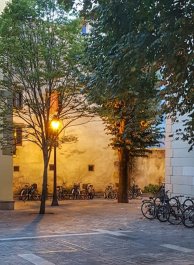 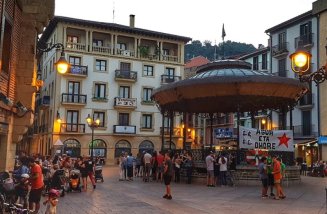 We’d found a pizza restaurant earlier and we headed back through the busy streets to find it again. I couldn’t decide what to order but no worries, you could do 50/50 here! And the crust was so thin and light it crunched. Lovely! Indeed as we strolled back we agreed that our day had been just about perfect.

Sleep last night though was not so perfect. Gerry has an irritating cough (for him and me). We searched on Google as he gets this a lot when walking and we wonder if he has a hikers hack? It’s caused by really heavy breathing, which it turn can irritate and inflame the airways. He does have a tendency to power up hills when I dawdle along. He’s had this for the last few walking trips so maybe this is it? Regardless the poor chap struggled to sleep well. And then the binmen arrived outside our window at 6:15 already hard at work. Neither of us wanted to wake up but in the end the street bustle won and we got up.

We were having breakfast in one of the little squares before 8:00. As we ate breakfast I said that I was in a groovy frame of mind… Which of course led to a song!

Gerry was watching men opposite working on the church roof and he wondered how much it annoyed them that the clock chimmed every fifteen minutes? I could see his point!

We headed back to the sea front and the start of a walk that Gerry has been looking forward to for so long. Many years ago we had a family holiday in Hendaye and decided one day to have lunch in Spain. As we drove we decided against San Sebastian as it was too big; Gerry wanted a fishing village. We drove through Zarautz and along the coast road to Getaria. Today’s footpath runs alongside that road and for almost a decade, walking that path has been on his wishlist.

The weather was perfect. Cool but not cold. Misty but not overcast. It was a walk worth waiting for.

Every bend brought a different view. It made me think of our conversation the previous evening. Nothing is quite as it seems. The view looks amazing in one spot but totally different in the next, and just when you think it can’t get better it does, but then you look back at where you’ve been and that looks amazing too. Things aren’t fixed and I guess it doesn’t hurt to remind ourselves of that sometimes. 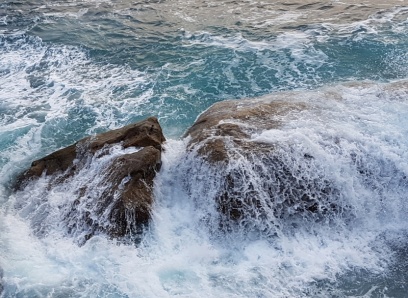 The sun revealed herself through the cloud, burning off the morning mist. We felt her before we saw her. I checked the time and it was still only 9:23 but the weather was meant to stay cooler today.

On we walked. Watching the waves break over the giant rocks; some natural and others placed to protect this coastline. Enormous blocks of black granite the size of a car, scattered on the shoreline like a collection of Oxo cubes or those cube-shaped cola flavour sweets.

Before we knew it we had arrived in Getaria. We’ve been here several times over the years since that first visit. We stopped for a cold drink by the harbour where the barman was so grumpy he wouldn’t even let us have a sello! Once refreshed we climbed up into town, got a sello from tourist information, admired the escalator that takes folks from the bottom of a great hill to the top, before picking up the arrows and moving on.

We climbed a short but steep hill and then down a cobbled lane that we hoped didn’t go on for too long as it’s hard walking on those old stones. We wandered through vineyards where men were busy harvesting, and on through apple orchards and corn fields. It was one of those perfect days and we soaked it all up. As we climbed one of the last hills we sat and munched a banana beside an old church, mountains to our left and the coast to our right… Oh it was glorious. As class of school children arrived as we left, we’d been hearing their excited singsong chatter across the valley and we’re surprised by how young they were! 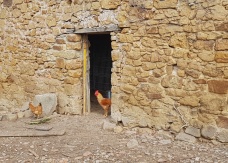 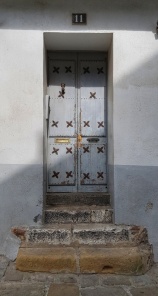 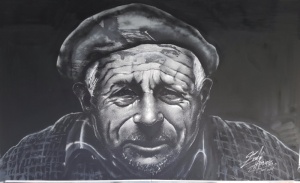 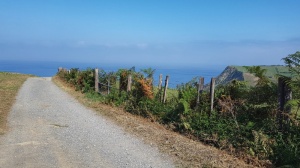 But Zumaia was calling so we walked on and as we rounded the corner the amazing sea views were back. Gerry said again it’s everything he hoped it would be and more!

On we walked. We were passed by half a dozen other pilgrims… They were maybe not feeling as groovy as us… Slow down, you move too fast, gotta make the morning last…

A short sharp drop into town where we headed to a bar and lunch. This was where our walk ended today. We’d decided to follow yesterday’s template and we planned to catch the train into Deba rather than face another 10 kms. It’s a plan that’s working for Gerry… Hikers Hack or no, we’d been in our room for maybe five minutes before he closed his eyes and drifted off to sleep. I hope he’s dreaming of that coastal path… It was pretty spectacular! 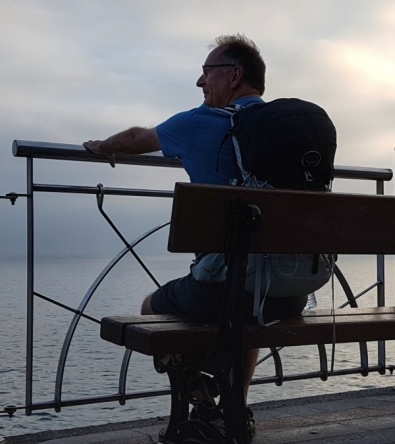 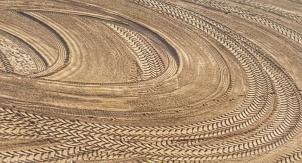 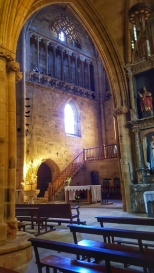 P.s. can anyone tell us what plant we can smell… Slightly flowery, slightly sweet grass, slightly honey… We can’t figure out where it’s from but it’s prevalent a lot when we’re walking