After the long hot walk to our hotel yesterday we felt a little jaded. But after a nice long shower and dressing my knee and a quick afternoon snooze for Mr S we felt a lot better.

Dinner was at 7.30 and it was a taster menu… hence followed course after course of tasty morsels. Local produce turned into fabulous dishes, all different and all very yummy! The chef/owner was once a banker but he quit to follow his passion… cooking and food! Our waitress told about each dish and about this part of Portugal… she spoke excellent English and could not have been more helpful.

We chatted with the only other couple; a Swiss husband and wife taking a late holiday. When pudding was served the chef and the waitress arrived with a sparkler laden slice of cake and a bottle of local bubbly.. champagne all round! Happy Birthday my dear sweet Gerry! 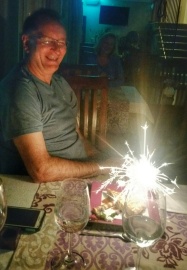 Last night’s accommodation wasn’t cheap. It was just shy of 200€ for a nice double room, a fabulous dinner and a packed breakfast and a flask of coffee… prepared in advance for us as we were leaving early. It’s no Parador, but it was charming and imaculate and friendly and they gave us the warmest welcome and the bed was very comfortable… and it was the most perfect birthday treat.

Gerry is feeling a lot better but he now has a terrible cough. Poor chap coughs and coughs so hard that every now and then a really loud fart sneaks out too. (can someone please explain why we find it so funny) The cough is so bad he just finds its better not to speak at all.. he resorted to writing me messages last night to try and avoid another attack. Oddly he is fine when walking.

My knee is OK. It’s very sore, skinned like a play ground accident but with three deep cuts that we are trying to ensure stay clean and infection free!

We set the alarm for 6.30 but we were awake at 6.00. We ambled because we thought we had too much time.. which is always a mistake as time flies. We were on the road at 7.30 but we could have made it at 7.00… no matter though as we caught the glorious sunrise.

I love sunrise. I love the colour of the sky and the scent of fresh dewy dry grass… this light and scent will always remind me of our mornings on the Via de La Plata.

I stopped to take photos. It’s chilly and we think about fishing out jumpers but we are both too lazy to bother and we just walk faster to warm up. I’m also feeling a tad chilly as my craghopper trousers are now shorts… my knee was too sore for trousers so there was only one option…cut the legs off! I NEVER go bare legged so I have the whitest English woman’s legs you would ever find… I hope I manage to sport a nice tan by the end of the walk! (Ps sadly my Skins weren’t salvageable and they were left in the bin.) 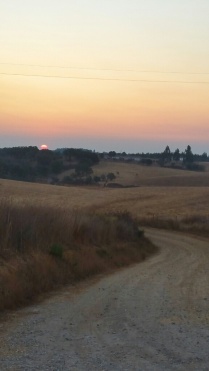 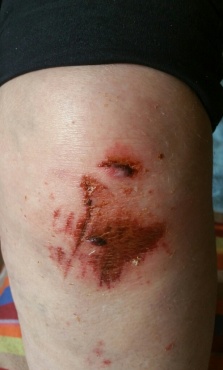 Because we deviated off of the Rota yesterday we had to find a way back. It’s very easy. We just walked out of the hotel, took a right to continue on the same road we finished on. After 1km or so you arrive in the village of Vale Das Eguas and pick up the markers again.

As soon as we hit town the dogs started barking. As with yesterday most are fenced or chained. Two pesky little chaps weren’t and they sat in the middle of the road barking at us… we both picked up a couple of stones and walk quickly by. The stayed put but continued to bark. A little further on another larger dog growled and kicked up the dusty soil like a bull preparing to charge. Again we collected a few stones and armed with my brolly marched by… he looked but just returned to his kennel. To be fair none of these dogs has done anything other than bark but it is unnerving, especially when they aren’t fenced… I’m just glad I have a Gerry with me!

On we walked. It was a beautiful morning. The path was soft underfoot, the air was cool and the views were fabulous. We passed sheep and goats and cows. Dogs barked and birds tweated and cows mooed and a hundred bells tinkled across the valleys. This maybe rural Portugal but it was far from quiet! We walked on through pasture and eucalyptus forests and by paths lined with cork trees and it was the perfect antidote for yesterday’s hiccups. 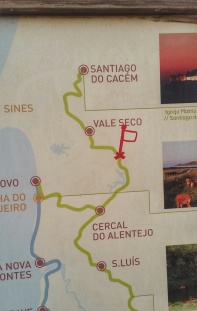 We stopped for a boots off at a huge reservoir. It was almost empty but you could see the dry empty areas stretching right back into the distance. We couldn’t imagine how much rain would be needed to fill this place! I’ll have to look for some photos.

So we sat and ate jam sandwiches packed by last night’s hotel and we drank cool water… chilled for us in the fridge. Gerry checked for blisters and we enjoyed just sitting there and watching the view. 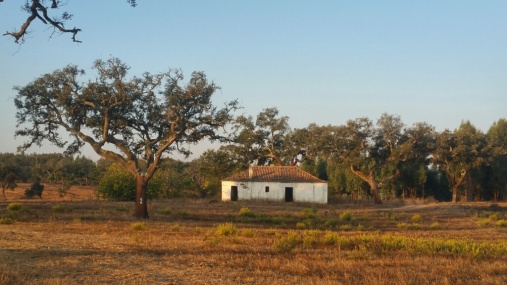 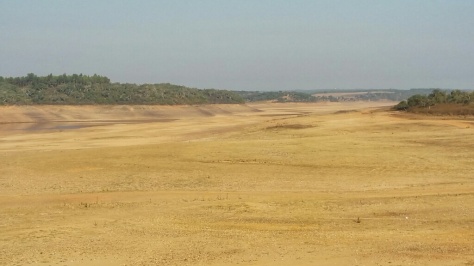 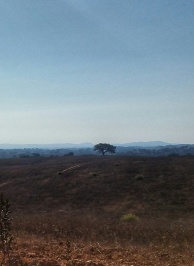 We tore ourselves away and headed off again. It’s warm now. The sun is still so hot and the brollies come out. We pass a lady walking the other way… we greet each other and she took our photo and walked on. A few minutes later a couple walked by too… again we exchanged greetings. I want to say Buen Camino but everyone just says hi… maybe next time I’ll say it.

There are more distant views and sheep but as we amble along chatting Gerry stops me. He points ahead and on the path was a wild cat. He was much bigger than a domestic cat and he stopped and stared back at us as we stared at him… none of us daring to move… until Mr Cat turned tail and ran in the opposite direction… we were able to follow his paw prints in the soft dust… Wow… he was a beauty!

Next we walked for a kilometre or two along a path lined on both sides with young eucalyptus trees; creating the perfect amount of dappled shade. At the end of the track we found a concrete block fashioned into a seat… perfectly placed in the shade beside a stream. I took a photo whilst Gerry looked up and realised that the dark mossy patches on the tree were moving and were actually hundreds and hundreds of leggy spiders… he went to investigate and I decided to have my drink in the sun… away from Harry Potter Spider land. ..euww! 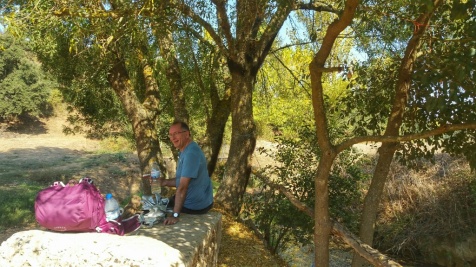 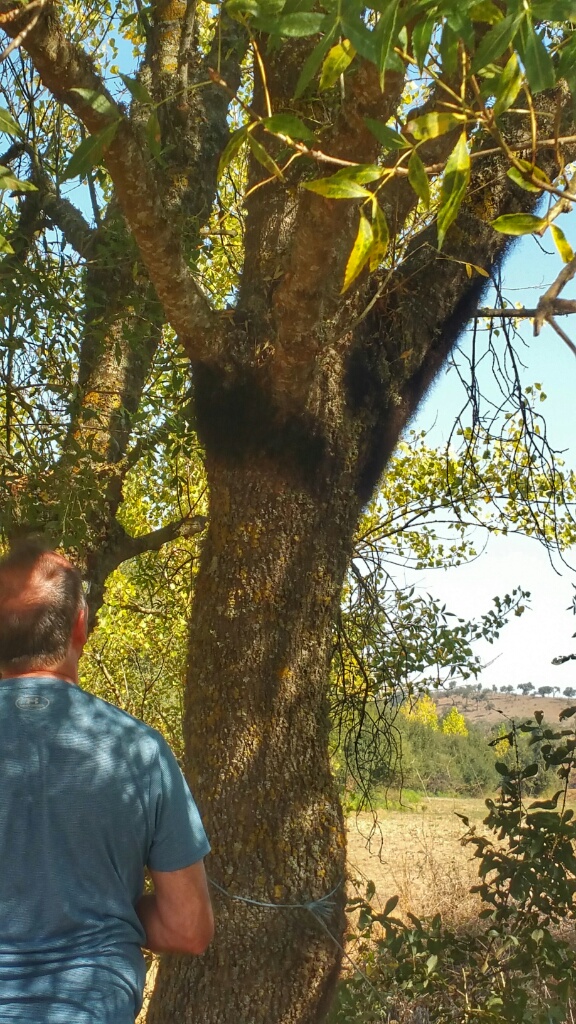 We ambled onwards for a few kilometres more until went reached the outskirts of Cercal do Alentejo. Our bed for the night was the first place we came too… which was unfortunate as the chemist and shops were a good kilometre further on… so we will no doubt be adding add few more clicks to the total before our day is over.

Today was perfect.. even with the coughs and spiders and dogs and sore knees… we are happy hikers for sure! 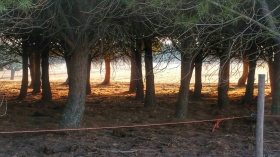 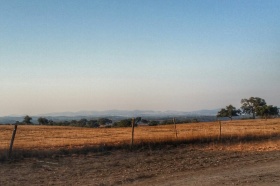 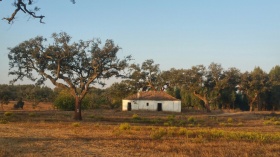 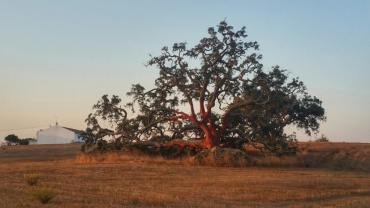 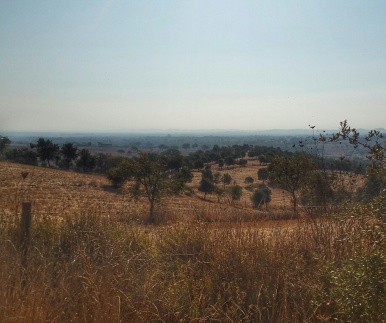 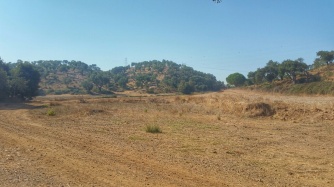