You can’t fail to be impressed with Roncesvalles… the albergue is first class. But there have been some changes recently and the number of beds greatly reduced.  As a result there were long queues for many hours and some folks slept down in the basement and sadly some walked on.

At dinner we were ushered in and very quickly served our first course… and almost immediately served our second.. and whilst eating this our pudding was handed out.  As soon as we had finished we were ushered out so that the next sitting could start.  It was a nice meal but very hurried and it felt like a production line. .. and very little time to talk.

I slept very well and awoke to the Roncesvalles musical alarm. We made a leisurely departure. Breakfast was at 7.00 but it was another production line and I was just relieved to be out on the road. 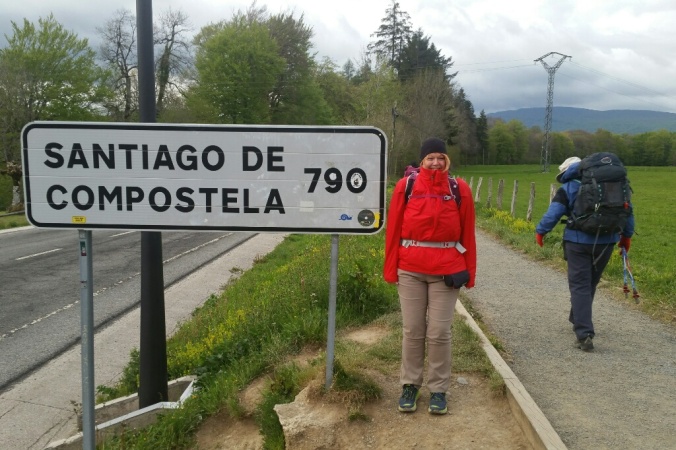 There are a lot of people walking.  There is very little chance of solitude in the first few kilometres… it does feel like we’re part of some long chain.  But as the morning moves on a few people speed up and a few slow down and a few stop for a drink and little by little there is some space to hear the birds and smell the flowers.

The trees are zinging in their spring colours.  My mind wandered back to another walk when the leaves were falling and one by one the trees slept. Today I thought they were waking… the wind was shaking them out of their slumber and the young trees were already awake and the older trees creaked and yawned…trying to grab a few more moments before stretching and  unfurling their leaves.  It was a beautiful morning.

We even managed a little Julie Andrews style meadow running… just for our Canadian friends! 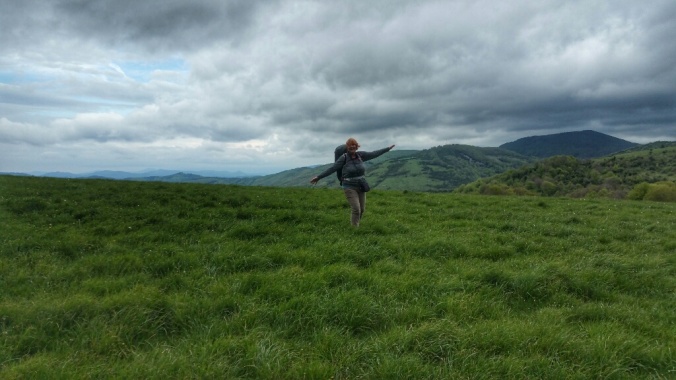 Then we hit the long hill going up to Zubiri and the rush petered out and the long hill split the group.  Sarah walked ahead…she really can glide up the hills.  Jaqui moved ahead too but my pace slowed.

I’m just rubbish on the hills.  Yesterday I called the girls goats but today I decided that wasn’t quite right.  I wondered if perhaps they were gazelles? Then I decided that Sarah is more like a lamb… boundless energy and with a great hopity spring in her step.  I pondered who Jaqui could be… she’s not as fast as Sarah but she also never seems to break her pace… I thought perhaps she’s more of a pony.  I however sadly seem to titter between tortoise and sloth.  I just can’t keep any speed going on the hills.

As I pondered and paused and puffed the hill slipped away and soon I was on the flat… I can pick up speed here and I caught up with Jaqui… our lamb/gazelle was too far ahead.  I explained my ideas to Jaqui and she felt she was either an old English sheep dog… or a Shetland pony.  And so we walked.

Sarah had waited on the downhill into Zubiri.  It was raining and she’s a little slower on the downs.  We shared our ideas with her and then I had a brainwave… Sarah bounces…she’s Tigger.  Jaqui is steadfast and perhaps the most sensible and she has little legs and pink shoes… obviously Piglet!  My bum is too round, I amble and my mind wanders as I walk… and I’m slow some times. .. and my coat is red and my hair orange… I’m Poo!

And so this was our conversation as we headed into Zubiri.  It was only midday and too early to stop and it was soooo busy, we decided to have lunch and walk on.

There were three other pilgrims also desperately seeking beds so our gazelle ran ahead. She grabbed us the last three beds in Zabaldika.  It’s actually a little gem of an Albergue. It’s not luxurious but it’s warm… unbelievably I have a  bottom bunk (Jaqui has a single bed!! But Sarah dipped out with a top bunk… the price she paid for being the skinniest).

We showered and changed just in time for dinner… a fabulous feast of salad and soup and chorizo and pasta and chicken… each plate following the other… with bread and wine and fruit for pudding.

We walked just shy of 37kms today… the last 16km in a storm. I’m aching and my feet are really really sore from walking with wet shoes and socks… but I’m warm and full and I thank my lucky stars that I have these blessings. .. there are many people in our world without either. 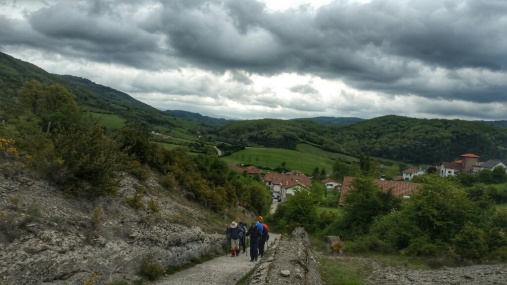 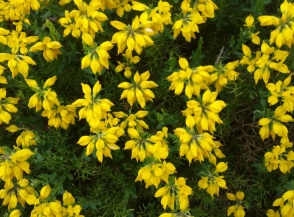 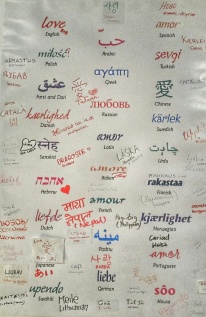 Ps not so many photos today… rain stopped play