I have dreamt in my life, dreams that have stayed with me ever after, and changed my ideas; they have gone through and through me, like wine through water, and altered the color of my mind. And this is one: I’m going to tell it – but take care not to smile at any part of it.

So last night we slept in the Monasterio de Santa Maria la Real de Oseira.  What the albergue itself lacked in warmth the building made up for with its centuries of history.

Brother Alfonso greeted us and signed us in.  He also explained what time Vespers was held if we wanted to attend… which we did.

We kind of settled into the albergue… a huge building attached to the monestary that could have been an old church… the ceilings were so high… although we’ve no idea of the original purpose. The room was damp and the  beds felt damp. Maggie and I swapped our matresses with the least damp ones that we could find from the unused beds.

At the appointed hour we returned back to the main entrance of the monastery and we were led into the hidden cloisters of this ancient building.  We followed two ladies who we think were working there as volunteers.  Up an enormous flight of stone stairs along stone corridors passing rooms and doors and looking out at the cloistered courtyards below.  We waited at a door and the sign asked for silence.  We waited and waited and realised that maybe we were at the wrong door.  After a little to-ing and fro-ing we were directed down more corridors following brother alfonso…with his white habit billowing behind him as he walked. 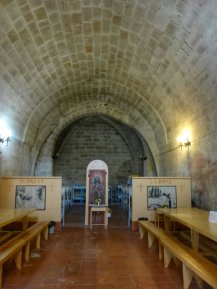 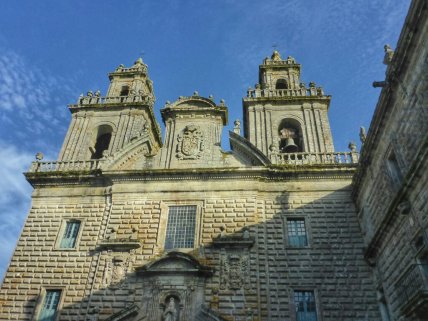 We were hushed into a tiny room come chapel.  No gold or rich cloths here. These are Trappists Monks and they have chosen to dedicate their lives to quiet contemplation and prayer.

We sat in the front pew… there were only two… I think there were 7 of us in the congregation.   The monks sat dressed in their white hooded robes and they sang and prayed in Latin… just as I guess their counterparts had done when his order first started in 1137.  They would stand and sing and bow their bodies to the simple alter.  this enormous building is home to just ten monks.  There was another chap… maybe 40 years old… who was dressed in civilian clothes but clearly part of the order.  I’ve read that the postulant and novice process can take up to 9 years.

We sat and watched and listened and  pondered for about 40 minutes.  And when it was over a hooded brother led us a different way through this very darkened building.  one corridor after another we followed him… through doors and back down stairs until finally we were outside and near to the albergue door.  Gerry said he felt as though he had just been rushed through a Dan Brown movie.

We went back to the bar where the old lady of the house made us galician cabbage and bean soup followed by chorizo ham and eggs… with slabs of local bread and a little vino.  It was simple but hot and tasty and served us well.

we talked about what we’d just seen.  it’s hard to imagine choosing such a spartan life.  Living in almost total silence in this ancient building… I could feel the history in the walls almost pressing down on us.  The monks pray several times each day.  The order of their day remains as it has always been.  Waking at the same time, eating at the same time, working at the same time.  never changing… day in and day out for a lifetime.  We could not imagine how hard that life would be… and yet they clearly seemed joyous with their song and their existence.  And we tried to imagine arriving at those doors as a boy and seeing them close behind you.  It was a thought provoking evening.

We talked to each other about life and our lives and for an hour or two we shared details of our lives that we rarely disclose.

It was an intense but oddly peaceful end to our day. Whilst the albergue wasn’t too comfortable the experience was magical and a day that we’re unlikely to forget or ever repeat.

We weren’t alone last night but we waited for the lone spanish guy to leave before getting up.  Today we thought would be easy and  breakfast wasn’t until 9.00… back in the bar…  so we took our time. We had coffee and a kind of toasted or fried bread… it had a warm coating of olive oil and served with home produced honey… and my goodness it tasted good.

We had read that there was a steep two kilometre climb out … they weren’t wrong either!  Steep and very stoney and rustic.  At the top we then had a similar climb down… then another up and then another down.  It started to rain a little but nothing to worry about.

We stopped for a boots off at around 11 only to realise that we’d walk just 5km… it felt like ten!  The countryside could be the backdrop for a Bronte film  set and both Gerry and I broke out into a little Kate Bush… Heathcliffe … it’s me it’s Cathy. .. I’ve come home… lala lala.

The terrain levelled out a bit… gentle hills rather than steep.  We heard voices behind and we turned to see the two korean girls and they were walking with a very tall chap from Stockholm.  the korean girls took off pretty quickly but we walked with the swede for a while… he’s quick though so Gerry decided it was time to take off his sweatshirt… which gave us a good excuse to stop… so we wished our swede a Buen Camino and he marched ahead.

A few minutes later we’d reached our lunch stop… cold drinks all round!  I ordered a huge cheese and egg bocadilla and Gerry and maggie had some kind of osso bucco stew… they loved it but I’m glad I went with the veggie option.

We were surrounded by the local dogs as we ate… all crashed out in the sun apart from one stroppy little chap who really wanted a few scraps.  Gerry tried to appease him with a neck rub but he was only content when maggie gave him a little of her beef.

It was an okay meal but the chap charged us 10 euro each… we reckon twice what we’ve paid elsewhere.  I know it’s cheap for us but we do feel a bit cheated when you know that they double the prices for pilgrims.

Anyway we walked on through green green fields and farms full of cows.  the familiar whiff of galicia hung in the air… ooh at times its quite strong and ripe:)

The path led us to a road and the road led us to the albergue.  we’ve all showered and washed our clothes and we’re considering a walk back down into town in a hour… for perhaps a beer or two before bedtime.

I cant quite believe how fast the kilometres are counting down now… just a few days to go… 74. 4 kilometres. How can we ever say goodbye to this path. 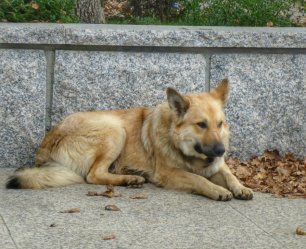 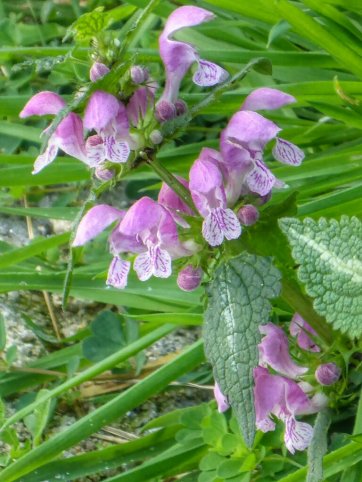 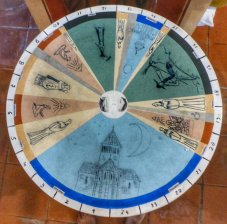 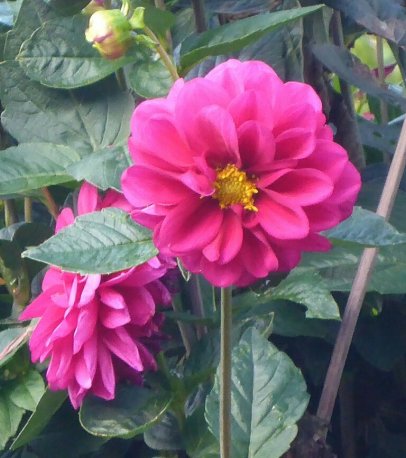 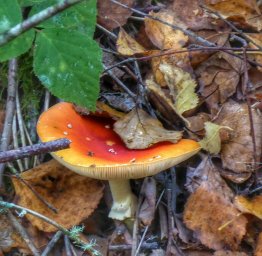 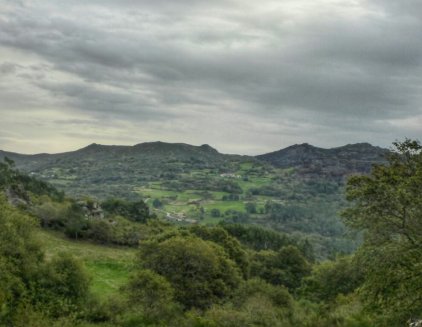 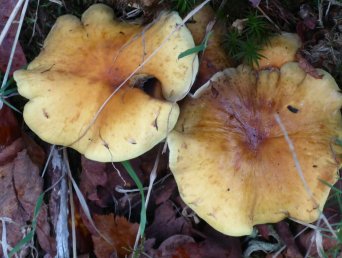 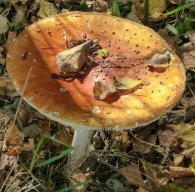