We hail the merry Autumn days,
When leaves are turning red;
Because they’re far more beautiful
Than anyone has said,
We hail the merry harvest time,
The gayest of the year;
The time of rich and bounteous crops,
Rejoicing and good cheer

I’m laying on my bed in the municipal albergue in Santa Marta de Tera… it’s a new building opened in 2015.  It’s very nice… comfy bed… we’re in a girls dorm for two and the Spanish pilgrim and another chap have their own boys dorm… just as I’ve strung my washing line across the only spare bunk in here and it’s full of my undies. Sadly we left the windows open for too long and it’s flipping freezing in here now.

We left our hostel in good time this morning.  It was drizzling when we left. We stopped in the church porch to put on our ponchos before setting off again. I thought I’d read somewhere that you follow the road out of town but we didn’t see an arrow.  I asked an old chap which road to take… he pointed right ( I thought left) but we took his advice… which was wrong.  His way took us on a path to the edge of the new high speed train construction site… and then led us back to the road.  We waved to the Spanish pilgrim as he sauntered by… we reckon we’d added a couple if kilometres to the day… bottoms!

The hills that we saw yesterday were looming… we were heading towards the windmills and I’m  reminded of Alto de Perdon on the Frances. Fortunately today’s climb wasn’t that steep and maybe we’re getting fitter but we kind of strolled along quite happily without breaking our pace. Even with her rotten cold, Maggie kept pace with me… she’ll be running up these hills in another week and leaving me in her wake! 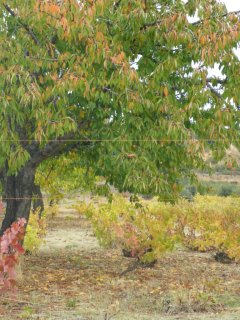 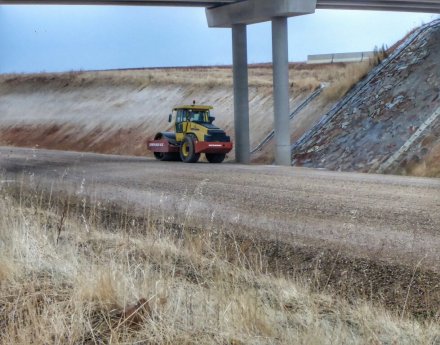 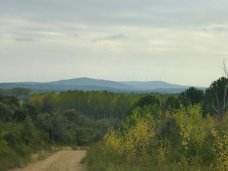 We’ve learned that on the Via you have to get the kilometres in early… the more we can get done the better… it works for us.

We followed orange trails today.  Soft and level underfoot and stretching on to the horizon.  I like this walk.  I’ve loved walking the Via too but it’s not Maggies favourite kind of path.  She likes bends and curves and she likes villages and places to stop along the way.  We talked about the last 28 days of walking… don’t get me wrong it’s been amazing but Maggie hasn’t ‘loved’ it in the way she ‘loves’ the Camino Frances.  I don’t think the same though as I have loved this path.

I am surprised at how beautiful the scenery has been.  I did so much research before starting and so much seemed to show the Via as long flat plains… it’s not.  It’s hills and forest and flatlands and pasture… it’s everything and at times breathtaking. I’ve been blow away by the history…  it’s roman roots drew me here originally but I never expected so much history to remain… to be visible.  The cities on the Via are amazing… the people captivating… I have loved this path.  The only thing I miss are the pilgrims!  I expected to see a few more people.  In time I think more will come…. maybe (hopefully) not as many as on the Frances but for sure more people will come and be captivated by this wonderful path.

So… we discussed the route and the things we’ve shared and then we drifted off into our own thoughts.

Autumn  is here. It’s cold and damp and there is a faint scent of wood smoke.  We stopped for lunch in a little village… whilst the Camino Sanabrés offers precious little in the way of pilgrims it does offer us lunch stops!  I have an omelette baguette… a bizarre sandwich that I’ve  only seen in Spain… but it was scrummy and the coffee was good too.

Back on the trail and back in the hills. We saw a truck ahead with three guys gathered around a few plastic chairs.  We both felt a little apprehensive… but needlessly.  They were just workers stopping for lunch… they had made a BBQ and were cooking sausages… they had bread and wine and beer.  They asked us to join them but we made our excuses and left… but the BBQ smelled good.

We’re staying in a little town where the oldest figure of St James as a pilgrim exists… we had a tour of the church before being taken to the statue… it was a little surreal as she gave the tour in French (just for us) and she substituted Spanish for French when she wasn’t sure… but we followed what she was saying… enjoyed the tour… and said hi to St James (and St John who was on his right).

We’re off to dinner shortly in the village bar… The Spanish guy is joining us… he lives near Santiago so he’s walking home. 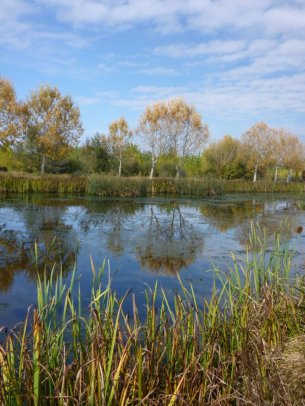 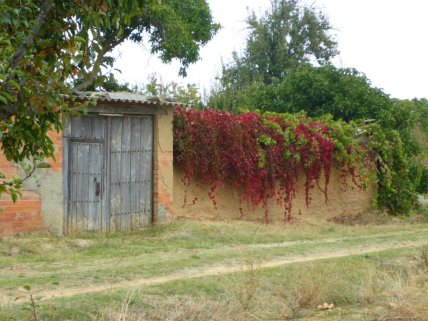 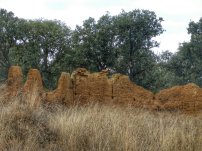 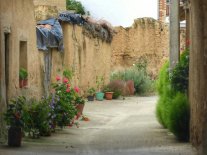