It is a misty morning
As I walk along the trail.
The fog..hanging softly
Like unto a misty vail.

Silence walks the parkway
As I tread so softly there,
Enveloped in Your gentleness
My heart….it has no fear.

The stream so softly gurgling
As it rushes down the way,
Swiftly flowing water…
Going to another day. 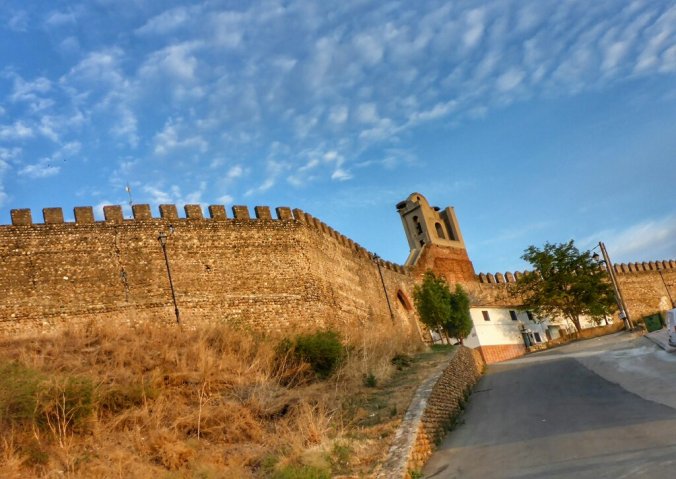 Last night we stayed in the Albergue Touristique in Galisteo.  We have a policy that each day when we reach our destination we either stop at the albergue or the bar…  whichever comes first.  Yesterday was one of those perfect combinations of bar and albergue… so we opted for bar.

It wasnt the most salubrious bar on the planet, but they had coke and bocidillos so it was heaven for hot pilgrims.  We were joined by another French man from Bordeaux… who couldn’t have looked any more French if he had tried… all that was missing was his garlic and a bike. He was also staying in our albergue but alas the Brazilian was not… all the albergues were completo so the poor guy had no choice than to walk another 11km to the next town… I’m so glad we reserved 2 beds the day before.

The albergue is good… Breakfast and crisp cotton sheets included… I’m in the top bunk but hey-ho.  We showered and washed our clothes and went to explore this fascinating walled town.

We fancied walking around the enormous walls but couldn’t find a way up.  We did find some steps and I managed to climb all the way to the top before realising that it was very high and I don’t like heights.  I came down on my bottom with Maggie coaxing me one step at a time… much to the amusement of the locals… who have probably seen it all before.  Maggie said she couldn’t believe I would even attempt it… I think I said Gerry won’t be in the least surprised. 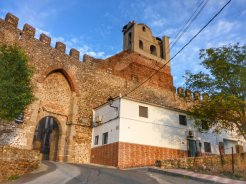 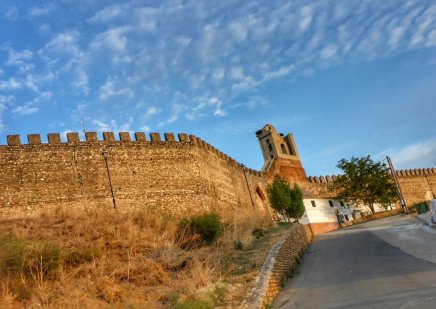 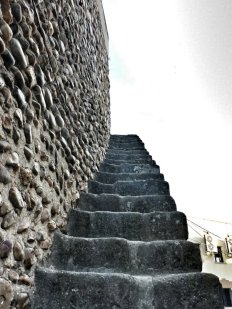 We wandered around and eventually ended up outside a little bar off of the main square. We asked if he did food… yes he did but not a menu… we could have hamburger and chips plus a drink for 6 euros.  That appealed so we ordered.  Oh no he explained… we don’t serve until 8:30 pm. .. this is a common problem that we keep finding on the Via. It’s too late for tired pilgrims… so we tried to explain using sign language and basic Spanish and said very sorry and went to leave.

No no he called… uno momento. He was on the phone for a few seconds and smiled and said 10 minutes. .. Wow thank you we say in unison.  A few minutes later his poor wife arrives with a sleepy toddler in her arms… OMG… how guilty do we feel!?  I think we said thank you perhaps another 100 times… we felt we needed to order another round of drinks and an ice cream for pudding too. What a lovely little family… go have a burger if you’re passing… they were very good. 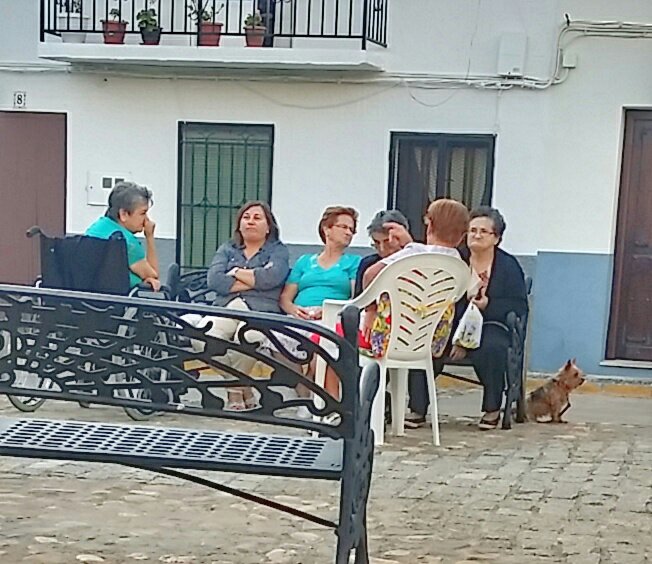 We walked home… or tried to. Lost in the darkness we ended up doing a complete circuit of the town wall… but it was a beautiful evening so not a huge problem.  Back down the hill we went…. passing the not so salubrious bar and home to our albergue.

This morning we slept in.  We had a choice of a loooong walk or a short walk… we chose the latter.  12km today which means we could leave later.  Our room mates were up at dawn but we turned over and slept. I woke around 7:30.  We took our time… had breakfast and coffee… fed the albergue cat some crushed biscuit… and finally left around 8:30.  Perfect timing as the sun was just rising.  We walked back into town… and out the other side..  and then over an old roman bridge.  Looking back at the scene behind us was intoxicating. It was a really lovely scene and we had to prise ourselves away and walk on.

We’re still in our little green oasis so we pass crops and green fields and row after row of beech trees… we passed fat happy cows and beautiful horses… a little dog who wanted to play and had to be coaxed back to his home.  We passed fields being watered by sprinklers… bullrushes growing with abandon in the hedgerows… and grasses we’d pay a fortune for at home.  This was a walk like none we’ve had so far on the Via. .. so perfectly rural.   We stopped for a shoe break at the halfway point and soaked it all in.

Next we came to a little village… folks going about their Saturday morning business stopping to wish us Buen Camino… it was time to stop again for some water and a juicy peach that I’d bought yesterday.  A man stopped and told us about the new municipal albergue in Carcabosa… we gave him a thumbs up and said we’re on our way.

But oh boy… as we left town, ahead of us stretching into the distance was more road and yet more tarmac.  It’s hard underfoot and this mornings rose tinted glasses had been replaced with hot sun… so even with a short day it was 2 hot tired pilgrims that landed in the muni a few hours later.

However this is a beautiful albergue. Spotlessly clean and everything a pilgrim could want… space, lockers, wifi, kitchen, washing machine… and very friendly and peaceful.

We showered and did our chores and ambled into town… egg and chips for lunch… there are a few bars to choose from and a couple of supermarkets.

We’ve not seen a single pilgrim since we left this morning… I guess they all opted for the longer walk.  The route was beautiful but the road walking was a monster (aka beast 🙂 ).. I think we made a good choice.

Ps thanks to David for sending us the lyrics to Lonely Goat Herder… sorry you’re stuck with the tune in your head… we moved on to Waltzing Matilda today! 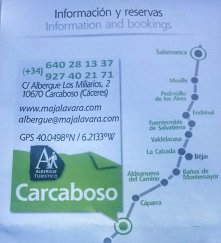 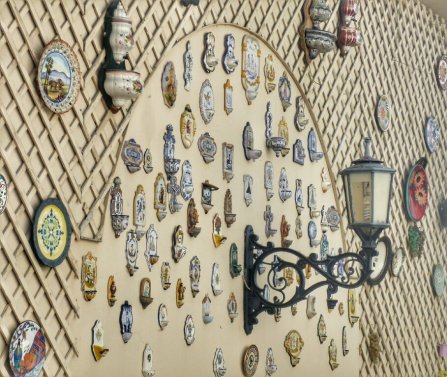 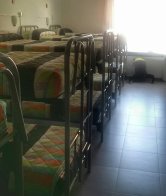 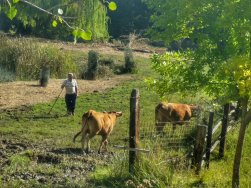 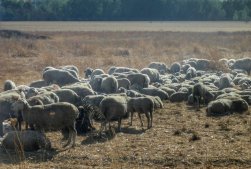 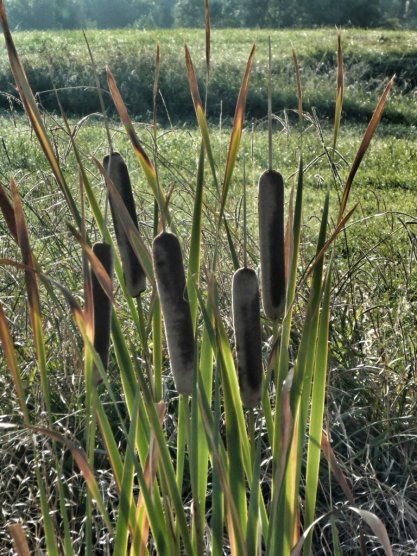 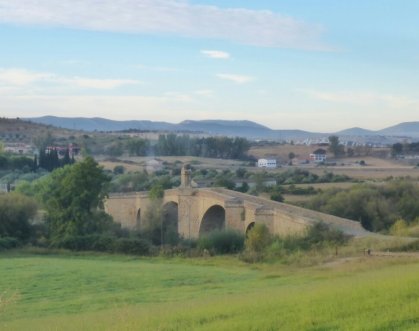 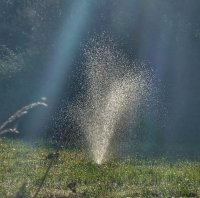 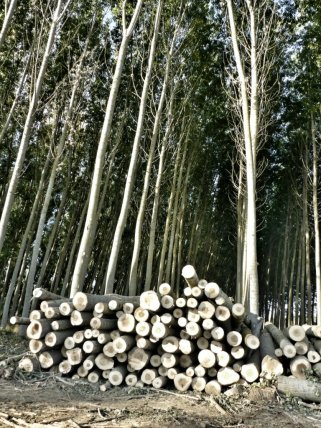 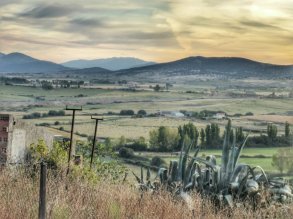 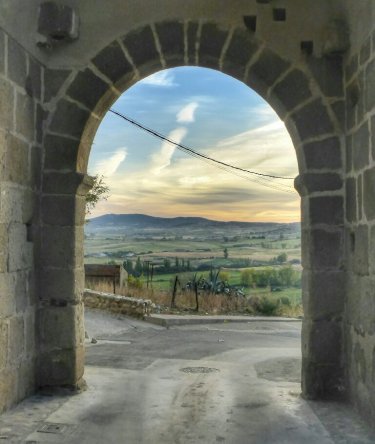