If you think you’ll lose, you’re lost
For out of the world we find,
Success begins with a fellow’s will
It’s all in the state of mind.

If you think you are outclassed, you are
You’ve got to think high to rise,
You’ve got to be sure of yourself before
You can ever win a prize.

Life’s battles don’t always go
To the stronger or faster man,
But soon or late the man who wins
Is the man who thinks he can

Our little cell was very comfy.  One of the best things about staying in convents and monasteries is that they are super clean and tidy.

I did however almost get locked out during  the afternoon rest period because I was hanging out my washing  as the clock struck 2.30… not for the first time this trip I ran… back just before the key turned in the lock… phew.

Maggie left her phone charger behind  in the last town but when we went exploring we found a tiny  little shop that sold everything… including an iPhone charger!  We wandered back through the town, joining the Bordeaux guys for coffee and cake en route.  Whilst there, the Italians told us there was bull fighting tonight… we decided that wasn’t for us.  But the whole town was in fiesta mode and it was clear there was going to be a big party. But not for us as we had mass at 7.00pm. 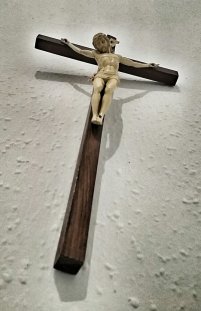 We headed for home and  at the appointed hour met the hospiderrio and walked across to the church… which was housed in the men’s hostel… on site but seperate from the monastery and albergue.  It’s home to many men, of all ages and states of health but most seemed to be suffering from mental health issues and some also had physical issues too.  It reminded me of the old Nichols Centre in Exeter.

As soon as we entered the smell hit me… not that it was bad but it was a wall of memories that smacked me in the face.  It was a shock… amazing how a smell can bring back memories.  It smelled of Newcourt House or the other places that Mum spent so many of her last years.

We walked quickly through and settled in the curch and I think I was in autopilot, still taken aback by what just happened.  The service was in Spanish and so I sat and pondered.  Whilst full of carers and kindness this hostel was sad.  I thought of Mum and wondered if she was aware of the stares from strangers looking around her ward… full of pity.  And I hated the idea of her watching them… watching her… with pity.  I resolved to walk back through the building with a straight back and look with admiration.  Admiration for what these men live with… their pain or fear or unknowing… and I think of my Mum and realise that instead of pitying her… I admired her for her strength.

Our little bunch of pilgrims gathered afterwards for a blessing… protect us on the road and say a prayer for these men in Santiago… and I shall.

I walked back with my shoulders back… meeting eyes and saying hello… fighting back tears thinking of Mum… Sally… and hoping that someone else did the same for her when she was alive.

I was relieved to get back into the evening air… I gathered my thoughts  as we went in search of dinner.

There are so many pilgrims here… a full house!  We take our seat amongst the Dutch, French, Belgians and Italians and enjoyed a meal of noodle soup followed by chicken or pork or rice followed by fruit. The monks clearly eat well!  We ate our fill and swapped email and phone numbers before heading off to bed.

Outside the party was starting as our lights went out.  I’m sure it was a great party but oh boy I hate spanish disco music… I think it stopped in the early hours but I was awake until gone 1.00am… and I knew I would pay for that lack of sleep later.

We woke at 6.40… dressed quickly and headed off to the bar across the road for breakfast… and already the usual suspects had gathered.   It was busy with just one guy behind the bar… he looked exhausted and I wondered if he’d been there all night.  Toast, coffee and hit the road… you know the routine by now.

Today we were heading for Valdesalor… but we were very aware of just 23 beds and that we were travelling in a wave of maybe 40-50 pilgrims.

The path was fairly flat and easy and the air was much warmer than yesterday.  I tried to avoid the obvious sunrise photos… there were clouds, there are a couple… and the countryside is not quite as nice as yesterday.

We passed roman mile markers and crossed an old roman bridge.  We thought of the legions that had walked in our footsteps so long ago.  Maggie started telling me about Thin Places.  She was explaining her feelings about the spirituality of the camino paths and how it seems to make us all look within… it certainly strips you bare… especially this path which can be really relentless.  I told her about last night and how I had been thinking of my Mum… and how sad I was not to have really known her and that I can never tell her how much  I admired her stoicism and strength and courage.  As I said the words my arms covered in goosebumps and regardless of the heat I felt cold… Maggie said that maybe I was in a thin place… a place where the space better heaven and earth is so small that we can reach across the divide… it’s an ancient belief… and I have to say at that moment I was happy to believe it.

We stopped for a coffee outside a village that looked so Anglo Saxon it felt out if place… and then on an on we walked across the flat lands. If a giraffe or elephant had crossed our path I swear I wouldn’t have been surprised..  there is a kind of African plains look about this place    We walked passing cows and oaks and fields of Trump Hair (named by Maggie for its familiarity to a certain chap in the US).

Then we had to cross an airfield… a real working airstrip!  we looked for planes before we crossed! At the other side we were greeted by an old chap on a horse with two dogs in tow… we waved  Buenos Tardes and he posed for photos before moving on.

On and on we walked … it was hot flat nothing… until finally we reached our destination… but of course you’ve guessed… Completo!   Nooo!  Let’s go find a bar we thought… but there was no bar.  We met Anna  and Staff and decided that we could not do another 11km into Cascares… so we walked out of town to a service stop… ordered a cold drink… and called for a taxi… the Bordeaux Guys arrived 2 minutes later… they decided to walk the 38km day… brave men indeed.

We however are here in the albergue… which was 15 euros for a bed… The Via is not as cheap as the Frances.  We’re  waiting for dinner as we missed lunch.  I’m tired and confused about how we manage the next few days… a couple of albergues are closed so we’re faced with more 38km days… but I need food and sleep before I can worry about that

I’m loving the Via still but crikey I hated the music! 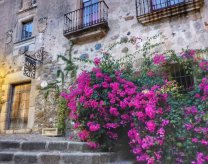 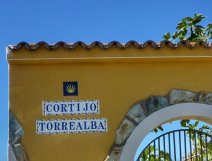 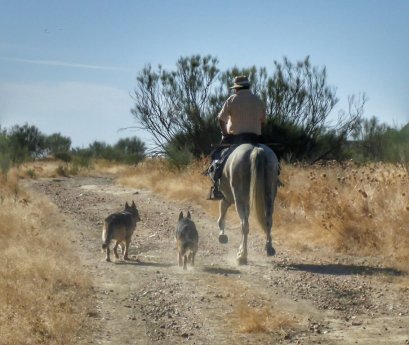 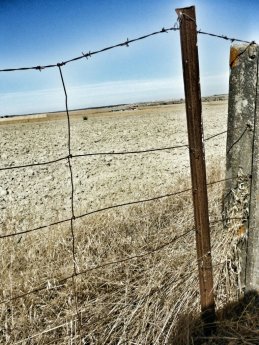 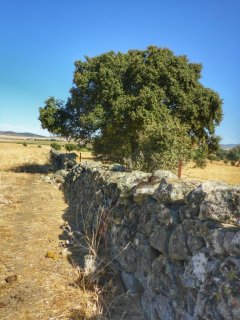 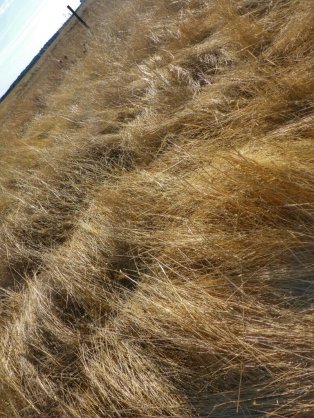 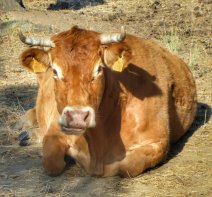 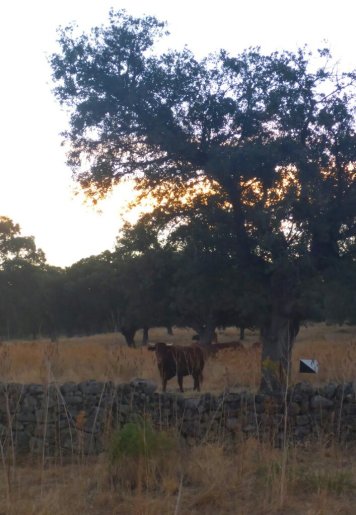 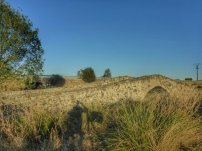 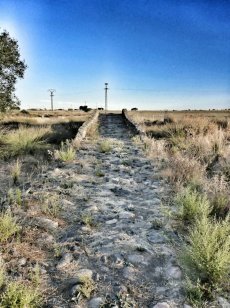 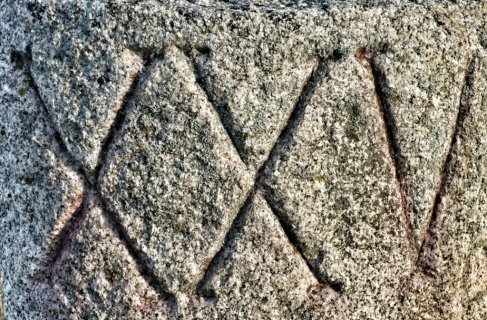 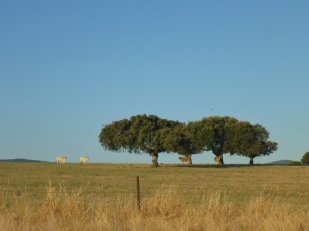 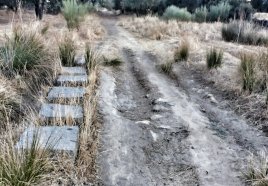 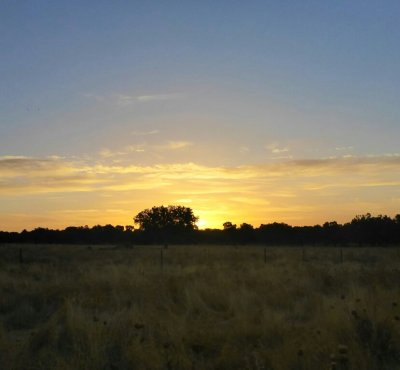 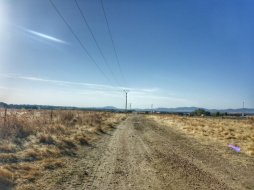 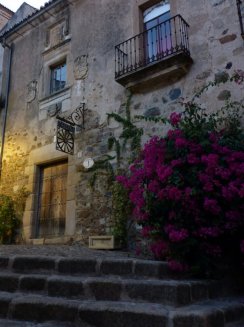