There are a few routes from Porto to Santiago. We had already decided that we would wait until the very last before choosing… the weather being the deciding factor. MSN meteo says sun and 18c for at least a week so the choice was made this morning; the Senda Litterol or seaside route would be our path… for a week anyway.

The Seaside Route from Porto to Santiago is approximately 273.5 kms. When it joins the Central Route (after 191 kms, at Redondela), there are 82.5 kms remaining to Santiago.

We met this morning at Mussidan train station car park. Jaqui was sporting the first (and hopefully only/last) mishap; she had sliced her thumb on a disposable razor so the first aid kit was out before we’d even started.

We had one last job before the off. We had all decided to bring walking poles for this trip, I’m not 100% sold on them but my knee has been a bit battered of late so I’m erring on the side of caution… and I can use them to fend off any barky dogs… or loose cows! Anyway, as poles aren’t allowed in hand luggage we packed them in a cardboard box, we sealed the box with parcel tape, hugged our chaps goodbye and set off.

We took the train to Bordeaux and then the shuttle bus to the airport. It’s the first time I’ve done this journey but as it was so easy I would do it again.

We arrived early and headed to the bag (box) drop area but it was still closed. Wandering around holding a rather large cardboard box was gaining the attention of the armed soldiers so we decided to go find a cafe for lunch. At the given time we returned and handed over the box. “What is in the box?” they asked “walking poles” we reply. They looked at us, examined the box and checked all passports and boarding passes before letting us proceed. We took the box to the bag drop scanner. “What is in the box?” they asked “walking poles” we reply. They looked us over and checked our papers and told us to wait. The box went through and again we were asked to wait. People came with cases and dropped them and still we waited. The box appeared again and went through the scanner again and still we were asked to wait. Clearly the box was causing some concern and yet we had thought it the perfect solution. Finally she said we could go… the poles had been approved. As we walked away a chap behind us appeared on crutches and I’m pretty sure that these could do more harm than our walking poles but no one blinked an eye or asked any questions… which just seems crazy? And both Jaqui and Sara have disposable razors in their packs and Jaqui forget she had a bottle of water in her pocket and again no one said a word… hey ho… ours is not to question why (I want to add… ours is just to clean the sty but you would have to have been a fan of Fletcher and Porridge to understand that!)

It was an uneventful flight. We didn’t pay to choose seat numbers and so we ended up front middle and back of the plane… but unlike Volotea last week we did have seats! I sat between a French lady with a very big puffa coat and a chap who was holidaying in Porto before heading to Lisbon for work. I read for a bit, closed my eyes for a bit, read some more and before too long we arrived.

I’m not a fan of flying but that was fairly painless. We headed to baggage reclaim to await our box. We waited… and we waited. One by one folks left with cases, even the chap on crutches found his case and pointed to it for his tiny girlfriend to retrieve. We waited until there was just us, an old Portuguese couple looking for a suitcase and a mum with a tiny baby looking for a buggy. We waited. They switched off the belt and we all looked at each other. BOTHER (or something like that?)!

Jaqui went to search for our taxi and let him know we had arrived and Sara went in search of help. I looked at the empty belt willing it to move.

A few minutes later a jubilant Sara returned. Our box had been delivered to the oversized luggage area! What? It weighs about 3lbs and you could lift it with one hand… but there it was sat alone apart from one enormous suitcase. We let out a little cheer but tried to not be too cheerful as there was no luggage for the Portuguese couple.

Three happy pilgrims jumped into the waiting cab and arrived at the very lovely Being Porto Hostel. We checked in, dropped our bags and dashed out again… we had to find the cathedral before it closed… we needed our pilgrim credentials! 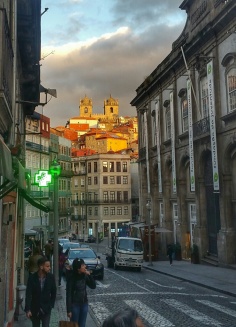 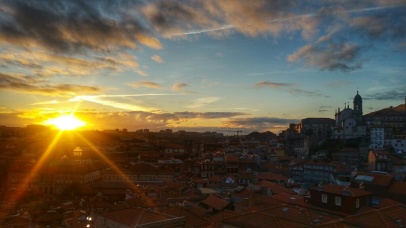 Crikey Porto is hilly! I feel I might be in need of a long walk to improve my fitness. We found the cathedral, watched the sunset and went in search of dinner.

Porto looks amazing but there was no time for sightseeing… we’ll be off at 7.30 tomorrow to follow some arrows… keep us safe saint James… we’ll see you in about two weeks. 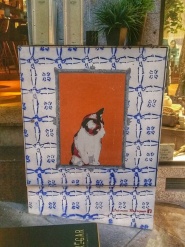 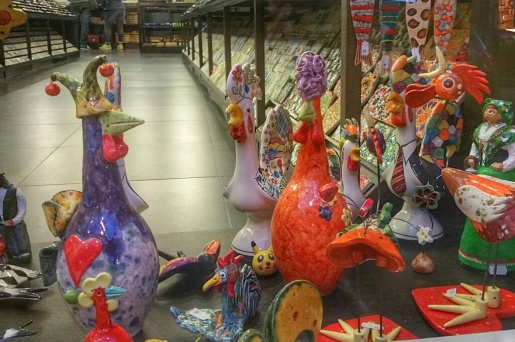 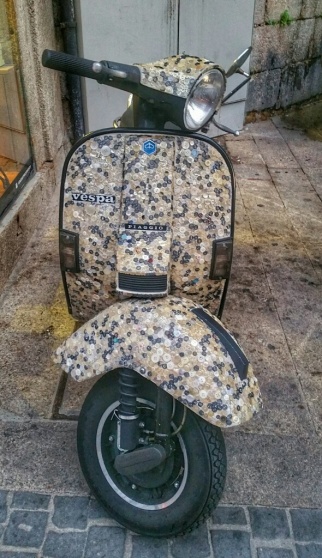 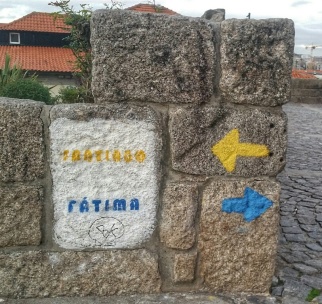